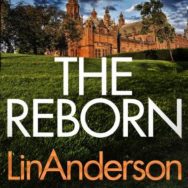 A ruthless killer is stalking Glasgow’s streets in The Reborn, the seventh novel in Lin Anderson’s forensic crime series featuring Rhona MacLeod.When the body of a pregnant teenager is found at a Glasgow funfair, her unborn baby surgically removed, forensic scientist Rhona MacLeod is called in to assist the police. Suspecting the baby may still be alive, finding the killer becomes paramount.Delving deeper into the twisted case shines suspicion on Jeff Coulter, a psychotic inmate at a nearby hospital whose hobby is making Reborns – chillingly realistic baby dolls intended for bereaved parents. But how could he have orchestrated the murder from a secure psychiatric facility?With time running out, the investigation soon leads to four of the girl’s friends, who have mysteriously all fallen pregnant at the same time, calling themselves the Daisy Chain. It becomes clear that something much more sinister is at play than Rhona could ever have imagined. A killer is out there, watching, waiting and ready to strike again . . .

Lin Anderson is one of Scotland's national treasures – don't be fooled by comparisons, her writing is unique, bringing warmth and depth to even the seediest parts of Glasgow. Lin's Rhona MacLeod is a complex and compelling heroine who just gets better with every outing — Stuart MacBride The bleak landscape is beautifully described, giving this popular series a new lease of life * Sunday Times * The best Scottish crime series since Rebus * Daily Record * Forensic scientist Rhona MacLeod has become one of the most satisfying characters in modern crime fiction – honourable, inquisitive and yet plagued by doubts and, sometimes, fears . . . As ever, the landscape is stunningly evoked and MacLeod's decency and humanity shine through on every page * Daily Mail *