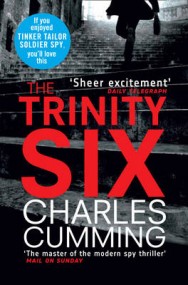 Perfect for fans of John le Carre – the most explosive secret of the Cold War could be exposed: but the bigger the lie, the more ruthlessly it will be protected…Hard-up Russia expert Dr Sam Gaddis finally has a lead for the book that could solve all his career problems. But the story of a lifetime becomes an obsession that could kill him. When his source is found dead, Gaddis is alone on the trail of the Cold War’s deadliest secret: the undiscovered sixth member of the infamous Cambridge spy ring. Suddenly threatened at every step and caught between two beautiful women, both with access to crucial evidence, Sam cannot trust anyone. To get his life back, he must chase shadows through Europe’s corridors of power. But the bigger the lie, the more ruthlessly the truth is kept buried…

Reviews of The Trinity Six

Charles Cumming was born in Scotland in 1971. He was educated at Eton and graduated from the University of Edinburgh in 1994 with First Class Honours in English Literature. The Observer has described him as “the best of the new generation of British spy writers who are taking over where John le Carre and Len Deighton left off”. In the summer of 1995, Charles was approached for recruitment by the Secret Intelligence Service (MI6). A year later he moved to Montreal where he began working on a novel based on his experiences with MI6. A Spy By Nature was published in the UK in 2001. This is his fifth novel.