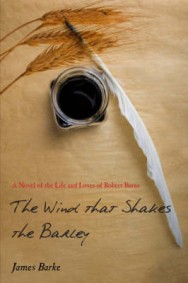 Home > Fiction from Scotland > The Wind That Shakes the Barley: A Novel of the Life and Loves of Robert Burns

The Wind That Shakes the Barley: A Novel of the Life and Loves of Robert Burns

Published in time for the 250th anniversary of the birth of Robert Burns on 25 January 2009, “The Wind that Shakes the Barley” is the classic novel of his life and times. Although he died at the age of just 37, Robert Burns had an extraordinary life. Born into poverty and hardship, the family somehow managed to hire a tutor for the young Robert and his intelligence and passion were obvious from an early age. It was the start of a journey that would see him become one of the most talented and respected writers we have ever produced.”The Wind that Shakes the Barley” is the first book in James Barke’s quintet of novels about Robert Burns and brings his early years vividly to life. The quintet was Barke’s life’s work and this is the finest and most accessible novel about Robert Burns ever written.

Reviews of The Wind That Shakes the Barley: A Novel of the Life and Loves of Robert Burns

"'He tells us a story, a living story, of Burns as it has never been told before. It is not stiff with interjected dates and place-names and occasions. No, it flows easily and mightily.' Scottish Field 'a vivid, sympathetic and eminently readable account' Oxford Mail"

The son of Galloway parents, James Barke moved to Glasgow in his teens, where he worked in the shipyards and actively participated in the local political and cultural life. He had numerous novels published between 1933 and 1939 before he took on the ambitious task of re-creating the life of Robert Burns in a series of five novels. A lifetime of arduous research, combined with a novelist’s rich talent, ensured that the five volumes have deservedly been best-sellers and attained worldwide success. James Barke died in 1958.