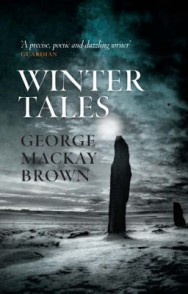 This is a superb collection of stories, focusing on light and darkness, winter and its festivals, by one of the greatest story-tellers of the twentieth century. Through a variety of characters from shipwrecked Scandinavians to an Edinburgh gentleman, George Mackay Brown looks at the impact of new ways of thinking on the traditional way of life of Orkney.

'George Mackay Brown's Winter Tales is an enchanting, tender and robust collection of stories steeped in the ancient rhythms and customs of rural life.' VOGUE 'The burnished beauty of his natural descriptions is that of a spellbinding spinner of tales, making his a worthy addition to the trove he would preserve.' SCOTLAND ON SUNDAY 'In this collection the author is at his celebratory and affirmative best. Everything he writes about is rooted in the harsh Orkney landscape, yet is often heart-achingly tender and compassionate.' YORKSHIRE POST

George Mackay Brown as born in Stromness, Orkney (the ‘Hamnavoe’ of his stories and poems), in 1921. He was at Newbattle Abbey College while Edwin Muir was Warden. He read English at Edinburgh University and afterwards did postgraduate work on Gerard Manley Hopkins. He became a Catholic in 1961. He died in Orkney in 1996.