The author of the Rhona MacLeod novels in conversation

The creator of beloved forensic scientist Rhona MacLeod and founding member of the Bloody Scotland Crime Festival, Lin Anderson gives us a peek into Scotland’s crime writing fraternity, encourages us to keep secrets as long as possible and indulges our speculations about a meeting between Rhona and Rebus.

BFS: You’ve been coined one of the leading ladies of tartan noir. To your mind, what attributes characterise Tartan Noir? How do you feel your work challenges, upholds or develops that tradition?

LA: The term Tartan Noir was coined by Ian Rankin when chatting to American crime writer James Ellroy at a crime fiction event in Nottingham. Ian explained he was a crime writer who wrote about Edinburgh and the darker side of Scottish life. He said, ‘You could call it Tartan Noir.’ Ellroy laughed and signed the book ‘To the King of Tartan Noir’. Although even Ian would agree that the real ‘King of Tartan Noir’ is undoubtedly William McIlvanney with Laidlaw. I think it’s distinguishable from other crime writing, because it’s very Scottish in attitude (the old Jekyll and Hyde effect), use of language and humour. Willie said he wanted to write a story that reflected the people he knew, the voices he heard around him in Glasgow. I think that tradition has continued, although it’s not confined to one location in Scotland. As to my forensic series…well it doesn’t feature a male detective with angst and a drink problem, so in that respect it’s different. Dr Rhona MacLeod may not have a drink problem, but she’s a workaholic with a complicated love life.

BFS: You’ve formally studied forensics, and are very well-respected within the forensics community. What do you enjoy most about that research, and in which ways has it informed your work?

LA: I studied mathematics at university and taught it for a number of years. Maths doesn’t change and the answers are at the back of the book. When I switched to teaching Computing Science I loved the way it was constantly developing and changing. Advances in forensics are there because of the advances made in computing science. At the end of the day though, being a forensic scientist is all about asking the right questions of a scene, just like a good detective. When I come up with an opening scenario, I walk Rhona onto the scene and get her to ask what is forensically interesting about it. Those questions lead the research.

BFS: Can you talk to us a bit about the challenges (if any) of writing women, either as protagonists, victims or perpetrators? Any advantages?

LA: I’m not sure I distinguish by gender particularly, but more by what the character thinks and does. I create characters and try to make them as real as possible (they are to me). One good quote I always remember when writing Rhona is this… ‘A woman is like a teabag. You don’t know her strength until you put her in hot water’. You could happily substitute ‘human’ for ‘woman’ in the quote, although you’re less likely to raise a laugh from the audience with that.

BFS: You once said that, at the end of the day, ‘the crime story is about the people, not the crime.’ What fascinates you most about people, and where do you look for character inspiration?

LA: Everywhere. All drama is a character in action and life is a multitude of small dramas. Listen in to peoples’ mobile conversations on the bus. Watch what people do or say on trains. And read. All stories are an attempt to try and understand the human condition. I once read that writers are observers of life more than participants and I’m inclined to think that may be true.

BFS: You’ve quoted Ian Rankin as saying, ‘Scandinavia doesn’t have better crime writers than Scotland. It just has better PR.’ Why do you think Scotland has produced such a rich vein of crime writing?

LA: The crime writing fraternity in general is very nurturing and encouraging of new writers in the genre. When we set out to create Bloody Scotland we had three aims. The first was to encourage new writing. The second was to showcase established Scottish writers and broaden their reach beyond Scotland. The third was to feature international stars including our own. Bloody Scotland as a brand is there to sell Scottish crime writing worldwide. So in that respect it now is our PR. The talent was there, it just required nurturing and selling.

BFS: Whilst we’re speaking of Ian Rankin, who is a self-professed fan of your main protagonist, what do you suppose Rhona and Rebus would make of each other, if they were to meet?

LA: Mmm. I think Rhona would probably irritate the hell out of Rebus and vice versa, but I think there would definitely be a sizzle there.

BFS: What advice would you give to aspiring crime writers?

LA: Always keep the secret as long as possible. That refers to every secret, small and large, even who’s on the other end of the phone. If you’re about to release some information ask yourself if you can keep it just a little longer. You almost always can. 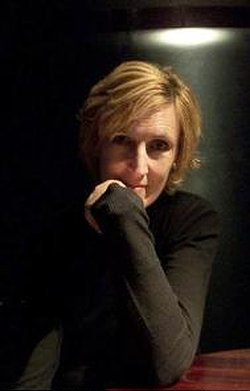 Lin Anderson was born in Greenock, Scotland of Scottish and Irish parents. She has lived in many parts of Scotland, and spent five years living and working in Nigeria. She used to work as a teacher, but now writes full time.