Edwin Morgan: As Others See Us

PART OF THE In the Shadow of Burns ISSUE

As Others See Us is based on a photographic exhibition from Tricia Malley and Ross Gillespie, who together form the renowned partnership broad daylight. The exhibition was part of the celebrations for the 250th anniversary of Robert Burns’ birth. The portraits capture a unique insight into the sitter, enhanced by the accompanying text, as each was asked to contribute their favourite poem from Robert Burns, and to explain why it is special to them and what they think it means to Scots today. 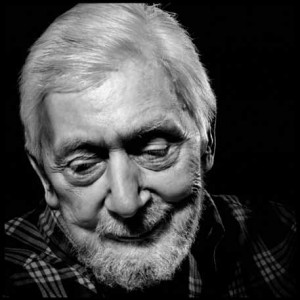 The Address of Beelzebub (The Devil) to;
The Rt. Hon. John, Earl of Breadalbane;
1786 A.D (5790 A.M)
Go on, my Lord! I lang to meet you
An’ in my house at hame to greet you:
Wi’ common lords ye shanna mingle
The benmost newk, beside the ingle
At my right hand, assign’d your seat
’Tween herod’s hip and polycrate
A seat, I’m sure ye’re weel deservin’t;
An’ till ye come – your humble servant,
BEELZEBUB
Hell, 1st June, Anno Mundi 5790.

This poem offers a very interesting, unusual slant on the Highland Clearances, as it deals with early attempts to prevent the Highlanders from emigrating to the New World. It made a strong impression on me as a poem, but it is particularly interesting that someone renowned as a lyric poet should also write such a powerful satirical work. It almost needs a key and notes to get the full meaning from it. Some commentators did not like this contrast with Burns’s lyricism, but it is all to the good that a poet can write both satirical and love poetry.

Burns is the great example of a thinking man, gradually learning how many things he could do well, looking round the society of his own time and responding to it in his poetry. Here he mentions both his contemporaries, such as George Washington, and historical figures from the past that match the unscrupulous landowners of his day, and who are promised a similar reward in hell. This range of reference is all to the good. At the time, it was unusual to possess such a poetic range, but in Shakespeare’s and Milton’s time it was accepted that a poet should cast his mind widely. Burns had a sharp eye, a sharp ear, a sharp tongue – and enjoyed riling his contemporaries. It was excellent that he was able to do this as skillfully and energetically as he does here.

Eddi Reader: As Others See Us