In this Q&A award-winning author Janis Mackay talks about her time-travelling trilogy for children and tells us why Scotland’s past and future provides endless inspiration for her exciting writing which spans centuries.

The Unlikely Time Traveller is the third book in your time-traveller series. For anyone who hasn’t had the chance to read them, can you tell us a bit about the trilogy?

This exciting adventure travelling through time all began with my discovery of the diary of an eight-year-old girl from 1811. It inspired the character of Agatha Black, who landed up in Scotland in our time having time travelled 200 years into the future. Agatha was a gift for a writer: one of those characters that just arrives fully formed and ready for adventure.

There have been a lot of adventures, friendships and time-travel troubles in the series. In the second book Saul – who is the main character – travels back 100 years to the outbreak of the First World War, then in the third and final book he zooms 100 years into the future. While writing these books I became more interested in history and fascinated by the idea of forming friendships across time zones.

Your view of Scotland in 100 years is quite unusual. Where does this come from?

My future Scotland is, of course, fantasy, but I did a fair amount of research, including asking scientists what they predict might happen.

In this future no one uses petrol and they blend traditional ways of growing food and getting around with innovative ways. So, old and new, side by side.

I was once involved in a workshop where we were asked to look at the labels on our clothes and see where they were made. Everyone’s clothes came from places like Bangladesh, Cambodia, India, China, Vietnam… which got me thinking about how we don’t do the basic things that we (when I say ‘we’ I mean our grandparents and great grandparents) used to do – like grow our own food, make our own clothes. So it seems like in the future it would be a sensible thing to live locally and to learn to survive on a simpler and possibly more honest level.

I am also a member of the Green Party, and while writing this book I thought a lot about climate change and how we can make a world worth living in for those who come after us.

What inspired you to write about time travel?

I wanted to open doors to other worlds without writing pure fantasy. I think my genre is probably magic realism – where I write about ordinary children leading ordinary lives and then something extraordinary happens and their lives enter the adventure zone. Reading the diary of Marjorie Fleming was a big inspiration for me and gave me real insight into what life was like for a child in Scotland in 1811. 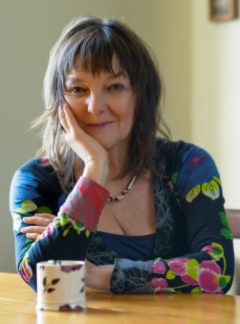 What did you find most challenging about this theme?

I think I found imagining the future the most challenging. With The Accidental Time Traveller and The Reluctant Time Traveller, because they are both in part dealing with the past, I could research them easily. With The Unlikely Time Traveller I had to make it up. In fact, my first attempt at it was too gloomy – the book that is being published now was my second attempt. I had to realise it isn’t my job to instruct but actually to tell a good story, so I lightened up my approach and decided the future was going to be FUN.

What was the most fun?

With The Unlikely Time Traveller the most fun thing was imagining exotic and amazing theme parks and swimming pools. I also enjoyed writing the scene where Robbie and Saul pretend they are tour guides – taking people down the Royal Mile and spinning them random stories about what life in the past was like. I found the banter between Robbie and Saul great fun to write. In fact, lots of the book was fun. I hope it is fun for people reading it too.

Do you have a favourite character in the trilogy? If so, why are they your favourite?

Saul would have to be the favourite because he holds the whole thing together. He allows adventures to happen because he gives things a go. I also love Agatha Black, and Elsie, and Frank, and Ness, and Robbie…

You’ve written books set all over Scotland. How have your own travel experiences inspired your writing?

I lived for five years in Caithness – right at the top of Scotland and next to the sea. The Magnus Fin books (also published by Floris Books) kind of wrote themselves while I was there. I just had to walk along the beach, see the seals, see the rubbish, watch the tides – and the underwater adventures of Magnus Fin appeared before me.

You’re also a storyteller, do you find that this has an impact on your writing and if so, how?

Yes – hugely I think. I am also an actress and I used to direct plays. I love Shakespeare and see themes from some of his plays come into my books – like twins for example. Shakespeare liked twins. So do I! Traditional storytelling is a wonderful source for writing new stories.

I always loved telling the Selkie story, so writing Magnus Fin was a case of re-working a story. Storytelling also trains you in what stories are – their form, the characters, and the importance of images over ideas. All important skills for an author.

Do you have a favourite place where you like to write?

I am sitting in the garden while I write this – in the sun. I like that. I also have a caravan on the west coast where I write a bit. I am fairly flexible with writing – but I do like to have a bit of a view!

If you could travel anywhere in the world, to any point in history, where would you go?

At the moment I am enjoying The Arabian Nights and Aladdin and Sinbad the Sailor – so perhaps to that part of the world. I’d travel the Silk Road and listen to Sheherazade tells stories for her life!

The Unlikely Time Traveller by Janis Mackay is out now published by Kelpies (PB, £6.99)

Poetry from the Iona Community

‘Cut deep into the earth – a firm track, going somewhere’