Scotland’s Landscapes tells the enduring story of the interaction between man and environment. Stunning new imagery from the National Collection of Aerial Photography comes together in this landmark book to build up a picture of a dramatic terrain forged by thousands of years of incredible change. Read on to discover how Scotland’s unique 12,000km coastline shaped the lives of Viking raiders when they arrived at Ardnamurchan around the tenth century AD.

Sometime around the tenth century AD, on the Ardnamurchan peninsula in the western Highlands, a group of Vikings dragged a boat inland from a sheltered beach. This was no ordinary coastal landing, however. As they reached a low mound above the shore, they began to dig a hole in the earth about 5 metres long and 1.5 metres wide. After manoeuvring the boat into this channel, they then lowered the body of a dead warrior carefully down into its wooden hull. Once in position, they arranged a host of possessions around the body. A shield was placed over the chest, while a spear, axe and an iron sword – with a beautifully decorated silver pommel and a bone hilt – were laid alongside. They also added a bronze drinking horn, flints for making fire, a metal pan, pottery from the Hebrides, a bronze ring-pin from Ireland, and a whetstone from Norway. Finally, the boat was filled almost completely with rocks. This burial ritual was reserved only for Vikings of the highest status: for chieftains, or great, ocean-going adventurers. The boat itself was a symbol of a life connected intimately to the sea. It is surely no coincidence that this final resting place looks out past the island of Eigg and the rocky peaks of Rum to where the sun sets on the open water.

The Ardnamurchan Viking remained lost for over 1,000 years, until the grave was chanced upon in 2011 by a team of archaeologists working on the peninsula. Believing at first that the burial mound was debris deposited by farmers during field clearances, closer inspection revealed hundreds of metal rivets – many attached to rotten slivers of wood – laid out in the distinctive outline of the pointed prow and stern of a Viking boat. Fragments of an arm bone and several teeth were all that were left of the warrior. But, along with the possessions and the wooden remains, archaeologists believe that laboratory testing may reveal where this person came from, and even the origin of the trees felled to build their vessel. This discovery, thought to be the first complete Viking ship burial found on the British mainland, would be remarkable enough on its own. But it is in fact just one of a number of monuments to the dead left in this bay going back almost 6,000 years. On a hillock just above the Norse burial site there is a stone cairn built around 4000 BC, with an internal chamber where human remains were placed. Over time the way people were buried in this cairn changed, from cremations to tight bundles of bones, and then, a thousand or more years after it was first constructed, a single, complete body was laid to rest along with pieces of pottery. This last burial saw the cairn sealed for good. Yet about 1800 BC, and just 10 metres away, a new tomb was built. 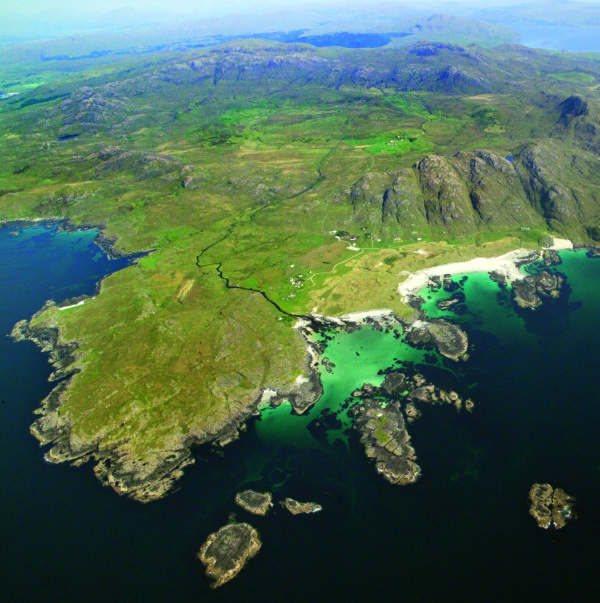 Behind the small nineteenth century settlement of Sanna on the western tip of the Ardnamurchan peninsula, a vast crater of rock tells a story of the landscape going back some 60 million years. As the North Atlantic trench widened and the earth’s crust thinned, a line of volcanoes burst into the western seaboard of Scotland, running from St Kilda, Skye and Rum to Mull, Arran and Ailsa Craig. At Ardnamurchan, rings of once molten magma now define a series of concentric circles – known as a ‘caldera’ – which mark out the magma chamber and foundations of a giant volcano. The legacy of this turbulent geological past is a fertile landscape – today a farm even sits right in the centre of the ancient volcano – and a coastline of sheltered bays and rocky inlets that has seen thousands of years of human activity, from Neolithic and Viking burials to medieval castles and crofting townships. © HES

Again, a single body was placed inside, this time with a jet bead necklace – a sign of far-flung trading connections – before the entrance to the grave was blocked off. There was clearly something special about this place, something that, over an extraordinarily long period of time, brought different people and cultures to the same spot to commemorate their dead.

For millennia the coast has been a gateway for the people of Scotland – landing ground for hunter-gatherers; beachhead for Viking raiders; staging point to strike out to abundant fishing grounds; borderland to the open highway of the sea. With so many lives half-lived on the water, it seems no surprise that communities would view the coastline as a symbolic location for ritual and remembrance. Perhaps these monument-graves were placed deliberately on the ‘edge’, in a landscape part-earth, part-sea; a landscape that defined the traditions and myths of the people who lived there – and also of those who were just passing through.

Of course, not all remains are designed to be lasting memorials, and there is more to this one Ardnamurchan bay than just ancient tombs. Immediately to the west of the beach, on a rocky promontory overlooking the inlet, there is evidence of a fort dating back to about 200 BC, with traces of burning and slag that hint at a centre for Iron Age metalworking. A thousand years before the Vikings arrived to perform their burial ritual, it is clear that there was a strategic need to watch the seas and mark ownership of the surrounding land. And it does not end there. Close to the fort, on a crescent of hillside, there are the rocky footings left behind by a nineteenth century farming community. The people of this township had worked the land of the bay up until 1853 – and then their houses were abandoned and demolished to make way for a sheep pasture.

This is just one tiny fragment of Scotland’s near 12,000km of coastline, a sliver of land on a Highland peninsula now seen as remote to our modern eyes. Yet its long, varied history demonstrates the cultural richness of our coastal landscape, and the enduring importance of the sea. Take almost any beach, bay, dune or cliff-side, and you will find the layered traces of man’s presence across time, from ancient harbours, promontory castles and medieval saltpans to stone ‘fish-traps’ and smugglers’ caves. The shoreline has represented security, survival, opportunity and adventure over many thousands of years. Yet a day does not go by without the inexorable shift of this physical border. From the coming and going of the tides, to rising sea levels and the never-ending process of erosion, the histories and memories contained within this landscape are at once enduringly vibrant and dangerously fragile.

Scotland’s Landscapes: The National Collection of Ariel Photography by James Crawford is out now published by Historic Environment Scotland priced £14.99.

‘Edinburgh is a city of fragile beauty, of secretive corners and sudden vistas’