‘How did the Iona Community really begin? The Seanachaidh tells it himself’

George MacLeod, founder of the Iona Community, is introduced as a Seanachaidh – Gaelic for storyteller – by Ron Ferguson who traces MacLeod’s journey back to his beginnings in Glasgow, preaching salvation to huge crowds on the streets of Govan.

Tell Me the Old, Old Story

There is a Gaelic term, Seanachaidh (pronounced Shenachay), which fits George MacLeod. It means a story teller, a Celtic bard who tells tales and hands on the oral tradition. These folk tales are not just for interest, though they are truly interesting; they are told over and over, and the retelling helps bind the community together.

Jesus of Nazareth was, on one level, a Seanachaidh. He told vivid stories and parables which gripped the imagination. The tales had punchlines and stayed in the minds of his disciples, and are still retailed two thousand years on. The Sermon on the Mount was a composition of oft-repeated sayings and word-pictures which haunt the imagination. Vividness, concreteness and atmosphere are essential to such stories and sayings, which can be much more easily passed down the generations than can a thesis. St Columba of Iona was a Seanachaidh, his poems and word pictures luminous in the Celtic mist.

George MacLeod was aware of the power of the story. In his lectures to Church of England ordinands in 1936 (he also gave the Warrack lectures on preaching at Edinburgh and St Andrews Universities the same year) he advocated what he called ‘modern parabolic’ preaching – the use of powerful stories and images to engage the imagination. He practiced what he preached, repeating and repeating and repeating until his stories became a community litany.

How did the Iona Community really begin? The Seanachaidh tells it himself. ‘I remember preaching individual salvation in the street in Govan one day – yes to five hundred men on a weekday at 4 o’clock. What else was there for them to do in the market place but listen to curate or Communist? An outspoken man in question time, speaking almost as God spoke to Isaiah, asked: “Do you think all this religious stuff will save?” Very down at heel he was, but very clear of eye. Suddenly, as he was speaking, I realised he was preaching the gospel and not I. I asked him to come up on the platform, but he refused and left the meeting. 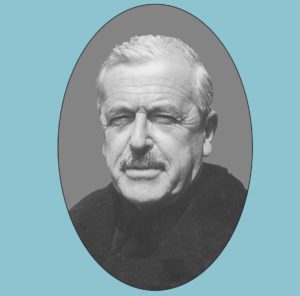 George MacLeod on the book cover

‘Some weeks later I received a message asking me to go to hospital and see a man called Archie Gray. I had never heard the name before, but when I reached the hospital I found it was my questioner from the meeting and he was dying of starvation. The man was single, in a whole household of unemployed, which he had left because he felt he was eating too much of the rations. Out of 21 shillings a week he was sending 7/6d a week to a ne’er-do-well brother in Australia. He said he was bitter about the Church, not because it was preaching falsehoods, but because it was speaking the truth and did not mean what it said.

‘Archie Gray was the true founder of the Iona Community.’

Typically, there are several versions of this story with variations and embellishments, all told by George at different times. The facts are now beyond recall: the truth lives on. At the heart of the myth there is the reality of a street encounter between an unemployed man and a privileged upper class preacher, in which the minister suddenly finds himself addressed by God in a moment which changes his life. To hear George retell the story with all the oratorical gifts at his command is first to be drawn into the Govan street crowd, and then to be addressed directly. Thus in the riveting modern parabolic preaching of the theatrical Govan Seanachaidh, a raw Glasgow street encounter becomes living story becomes contemporary Word-event becomes life-changing moment.

The story, and the repetitions of it, provides the main clue to the understanding of George MacLeod as he moves towards the founding of the Iona Community. It points to the burning heart of his conviction: that the Church has the message which the world needs to hear and it must not be apologetic about it in the face of other ideologies – but the message is being denied by the life and practice of the messenger. The story tells us more about George MacLeod than it does about the shadowy figure of Archie Gray. George despairs of the Church precisely because he loves it, and because he believes the Church to be the one body which can point the way forward for the world. The point is made in his lectures on preaching.

‘One of our local Clydeside brilliants, a quasi Communist who has smoked more of my cigarettes than any other man alive, suddenly burst into my room unexpectedly to proclaim, “You folk have got it: if only you knew that you had it, and if only you knew how to begin to say it.” It was his certainty that rebuked me; his implied need that moved me. What in effect he said was, “You know you could save me and you know you aren’t doing it.”

In leaving Govan, then, George MacLeod was seeking to make an experiment which would help the Church be true to its own message and, in a deep sense, to find its message.

George MacLeod: Founder of the Iona Community by Ron Ferguson is out now published by Wild Goose Publications priced £14.99.

The Memoirs of The Last Grand Duchess of Russia

‘The news that a revolution had broken out in St. Petersburg came like a veritable thunder bolt’