‘Book festivals are my thing, you see?’

Inverness-based author Barbara Henderson considers how her long-standing obsession with book festivals (she’s not missed an Edinburgh International Book Festival in a decade) led her to found the inaugural NessBookFest in 2016, which will return for a second year in October.

Every year, as soon as the new calendar is hung up in its spot beside the kitchen window, it happens: the January routine. I reach for the red marker pen and circle…

The dates of the Edinburgh International Book Festival, that’s what!

Book festivals are my thing, you see.

Even though I live in Inverness, I’ve not missed an Edinburgh International Book Festival in a decade—apart from the one where I had a vomiting bug and had to let the rest of my family depart without me, void train ticket in hand. 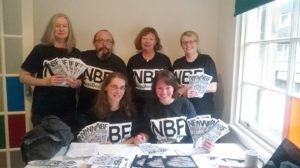 The Highlands come with their own philosophy where the arts are concerned—people don’t expect to be entertained. If nothing to their liking is on offer, they will make their own entertainment. Given the fact that the Inverness Book Festival was shelved some years ago, I finally cracked at the beginning of last year: ‘I’m so gutted Inverness has no book festival anymore’ I tweeted. ‘Anyone want to help me make it happen?’

It turns out there were many who felt the same. We pondered, discussed, met and formed a committee.

But alongside becoming the chairperson of a book festival committee, something else had changed in my life. Something drastic: After many years of nearlys and almosts, I had become a published writer. My Highland Clearances children’s novel Fir for Luck was published by Cranachan in September 2016.

Now I really, really wanted Inverness to have a book festival! 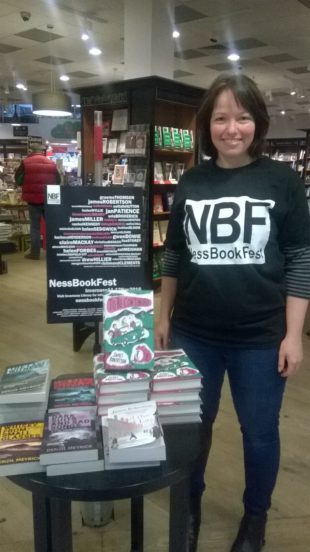 The first NessBookFest in November 2016 was a resounding success, considering we had put it together in about eight weeks flat. Most of the committee mucked in, performing and chairing events, as funding was by no means guaranteed. My very first (unpaid!) appearance at a book festival took place in a library children’s section with two school classes packed in, in the midst of a crazy day, running from venue to venue, introducing, thanking, greeting and tweeting in my role as chairperson of the same.

This year will be different. As volunteers, we will not feature committee members on the programme, and the committee have learned valuable lessons about what works and what doesn’t. But while my NessBookFest role will be very much that of an organiser, I have been asked to appear as an author at Nairn Book & Arts Festival as well as Islay Book Festival, both in September. Excitingly, Fir for Luck will also be available to buy at EIBF. This is a three-fold dream come true.

At first I thought that there would be little overlap — in one half of my life I was a volunteer organiser of a community event, on the other a performer. But there has been a surprising amount of cross-fertilisation. Here are three examples: 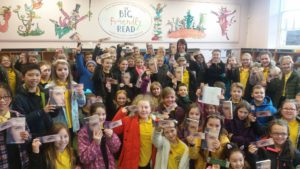 A packed out NessBookFest audience

I feel immensely lucky to be on both sides of the fence this year – the book festival world is comparatively small, but we all want each other to succeed. After all, all of us, as authors and organisers, strive to connect people with books, to help others discover the treasure we have found in stories, to marvel at the magic of black marks on white paper.

As a debut author, I can still barely believe that Fir for Luck is now part of that magic; that it has struck such a chord with readers and reviewers and that I should even be considered to take part.

Hey, everybody! I’m appearing at book festivals this year.

It doesn’t get better than that.

Book festivals are my thing, you see?

Barbara Henderson‘s debut novel Fir For Luck is out now published by Cranachan Publishing priced £6.99. She has events at Nairn Book Festival and Islay Book Festival. NessBookFest returns for a second year in October 2017.