We go behind the scenes of prolific author Cathy MacPhail’s writing process. She reflects on, and reveals, how she first finds then later develops authentic teen voices in her books, including the newly published thriller Between The Lies.

Teen favourite Cathy MacPhail has a unique ability to get to the heart of serious, topical issues through the stories of her feisty characters. Her latest book charts the sudden and unexplained disappearance of a local school girl. Between the Lies is a tense teen thriller that puts the lives of modern day teenagers under the microscope – desperate to be seen, bombarded with online harassment yet obsessed with living their lives on social media. But how does MacPhail create her signature authentic teen voice?

When I get an idea for a story, and I get loads of ideas, I automatically picture a teenager in that story. And to make that story work, it has to be a good character, a memorable character.

A story changes depending on the character in it.  Imagine if Cinderella was the ugly sister, bitter and jealous of her beautiful sisters, and she was transformed just for one night into the dream that was Cinderella. A totally different story because she was a totally different character.

But if character creates story, then it is dialogue that creates character. And as soon as I hear that character speaking to me the story comes alive.

Yes, I hear voices, all the time, and I love it.

The very first chapter of Underworld introduces a character called Fiona.  She steps into the story, bag on hip, chewing gum and almost immediately she snaps at a boy who has been bullying a girl who was overweight.

‘ Hey, pal, there are more craters on your face than on the moon and at least she can lose weight.’

And after that, in every scene Fiona appeared in she practically wrote it herself. I could hear her cheeky asides, her sassy replies. I loved writing about her.

Where did she come from? One of the best bits about being a children’s author is that when you’re invited to schools, you meet your readers. It’s the best research you can do. I’ve met many Fionas in my travels. Sometimes I wish I was one of them; I can never come up with a smart retort when I need it.

At one school a boy asked for my autograph, then he gave me his. ‘ Hold on to that,’ he said. ‘You’ll be able to sell that for millions on ebay one day, because I am going to be famous!’ That wasn’t just a character I had, but a plot for a story.

On another school visit I was signing books with a long line waiting to get their books signed. A girl came in, swaggering past everyo­ne. ‘ Hey! Chantelle,’ they shouted. ‘ There’s a queue.’

And Chantelle called back. ‘The queue starts behind me.’

And everyone laughed and let her go ahead of them.  And from that incident, I wrote a book called Copycat.

In Devil You Know I needed a tough, funny character to be Logan’s friend. The kind of boy Logan wishes he could be. Baz is a mix of boys I’ve encountered at schools. Boys who always have a group of friends around them, but boys who are a bit dangerous too.

At schools you’re seeing your readers in their own environment, you can watch how they sit, how they wear their uniforms, how they fix their hair and most importantly, how they speak to each other and to their teachers.

Dialogue creates character, and a single sentence can bring a character to life.

I hope I keep on hearing those voices.

Cathy MacPhail is the award-winning author of over thirty children’s novels including spooky thrillers for younger readers and challenging teen novels. Her books include Devil You Know. She was born and brought up in Greenock, Scotland, where she still lives. 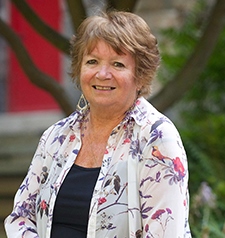 Cathy will be appearing at the following festivals:

More festivals will be announced soon.

Between the Lies is available now from Floris Books priced £6.99.

You might also enjoy this exclusive article by Cathy, ‘Where Are The Working Class Heroes?’, from the January 2017 Issue of Books from Scotland.