‘The Wages of Sin began as my love letter to Edinburgh, long before I thought I’d live here again’

Ahead of publication of her debut novel The Wages of Sin, author Kaite Welsh writes on the ‘three Edinburghs’ in her head, by exploring how the historic city has provided endless inspiration, from her early days as a student, to being an author living in, and writing about, the city today.

The Wages of Sin began as my love letter to Edinburgh, long before I thought I’d live here again. It’s a strange sort of love letter, blood-spattered and angry, and at the start my narrator, Sarah Gilchrist, doesn’t even like it very much. Sarah is not in Edinburgh by choice – she’s been exiled by her rich family following a scandal that leaves her free to pursue the medical degree she’s always wanted – and the dreich weather and grey stone buildings reflect her state of mind at the start of the book.

As a student I had Classics lectures in a wing of the old medical school and every day I passed two plaques, one to Sophia Jex Blake, the first woman to study medicine at Edinburgh, and one to Arthur Conan Doyle who found his own literary inspiration there. Feminist history and Victorian crime – it was clear that the Venn diagram of my interests overlapped at the University of Edinburgh. The idea of a female medical student who investigated murders, bound by a corset and restrictive gender roles, began to take root.

I began the novel when I was living in London and missing Edinburgh like a lost lover – the kind you technically can live without, you’d just rather not. I crammed the book into the nooks and crannies of my life, writing on the Tube, at lunch, at night, and as I went about my life in 21st century London, I felt the constant thrum of Victorian Edinburgh like an engine. It wasn’t until I was packing my things and signing the rental agreement on a flat in Leith that my soon-to-be-agent got in touch, proof if I needed it that moving home was the right thing to do. Once I lived here the book began to change subtly, my surroundings infusing my writing the way the smell of hops seep into my hair and clothes (and, confusingly, sofa cushions). 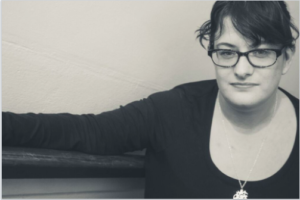 Wandering the Old Town in search for inspiration, I often find myself tugged down a particular wynd or side street where a plot point starts to develop. Oscar de Muriel, whose novels also take place in Victorian Edinburgh, once told me a story about successfully navigating the city armed only with a map from the 1880s. I’ve been known to give directions using landmarks that no longer exist and I’ve found myself purposefully striding to the clinic where Sarah meets Lucy, the woman whose death – and unhappy life – she finds herself avenging, only to remember that it doesn’t exist and I wouldn’t be qualified to work there if it did. As it happens, the place where I located the clinic is now a restaurant and looking around and saying excitedly “I’ve killed someone in here!” will result in the waiter avoiding you for the whole evening. Sometimes, when I’m stuck or (more likely) procrastinating, I find myself avoiding entire areas of the city because I feel guilty that I’m not writing. Conversely, the best spaces for me to write are the places where I used to write my essays as a student. I have a specific table at Elephants and Bagels where I wrote 13,000 words one day – and got through an entire loyalty card thanks to a lot of coffee – and then there’s the National Library of Scotland’s archives that let me slice into the seedy underbelly of the city and dissect its contents. It’s easier to write near the university, it tricks my mind into forgetting what era I’m in.

I have three Edinburghs in my head – Sarah’s, with its carriages and slums, the Edinburgh of my student days seen through a haze of lectures, alcohol and ill-advised kisses, and my present life. There are places where these worlds intersect and places I go to escape, where the veil between the living and the fictional dead are stronger, but I always find myself coming back through the Cowgate or over George IV Bridge to the shadowed, solemn courtyard of the medical school, hunting out Sarah’s next mystery.

The Wages of Sin by Kaite Welsh is published in hardback on 1st June by Tinder Press priced £16.99. Kaite launches the book at Waterstones in Edinburgh on 1st June. She will appear at various festivals over the summer period; these dates will be announced in due course.

The Giant Who Snored