‘There’s a hearth space, a shallow tank, a smell of stone and earth, and silence.’

Experience a new history of Scotland told through its places. In Who Built Scotland authors Kathleen Jamie, Alexander McCall Smith, Alistair Moffat, James Robertson and James Crawford pick twenty-five buildings to tell the story of the nation. In this extract Kathleen Jamie embarks on a highly sensory exploration of the mysterious broch on Mousa, one of the many islands in Shetland’s archipelago.

It’s half past ten at night in mid-July, and in the far north-west the sun rides low on the horizon, sinking amid sashes of ruby and crimson-tinted cloud. In the north-east, the cliff called the Noup of Ness stands silhouetted against a sky that is not quite dark.

On the pier at Sandwick waits an earnest group of about 40 people. We’re almost all middle aged, almost all visitors to the islands judging by our accents and languages. Some carry digital cameras, and torches we are requested not to use. No flash, no bright light, please keep torches pointed downward.

But a torch is not necessary. Our eyes soon adjust to the ambivalent shifting twilight the Shetland people call the ‘simmer dim’.

It’s a good business for the local boatman and his crew, ferrying visitors to Mousa and back. It’s only a 15 minute crossing by motorboat. Mostly they sail by day, but for a few weeks in midsummer they offer midnight trips too. The boat is full, the water is sheeny, two dark-eyed seals watch our progress. 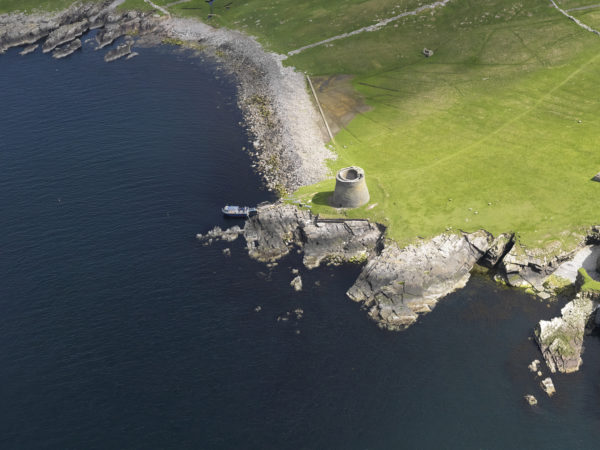 The island of Mousa has been uninhabited for the last couple of centuries. A couple of miles long and a mile wide, now grazed by sheep, it’s tucked in against the east Shetland Mainland. When we reach its jetty and look back across the Sound, we see a few streetlights gleam, In the distance, southward, Sumburgh Lighthouse sends out its measured flash.

Having disembarked, we form a long straggle following the shore southward. As we climb over a stile, cross a burn, walk through a damp hollow, the sound of the waves seems louder than by day. Snipe are calling from the thick grasses inland. The night is strange, atmospheric. We follow the curve of a bay, then a half mile away, darker than the low land around, see our destination, the brooding tower of Mousa Broch. From that distance, and in the half-dark, it looks like something left over from the Industrial Revolution, a structure both squat and tall – a bottle kiln perhaps. But it’s not industrial, that at least is known for sure. It’s Iron Age, and reputed to be one of the finest prehistoric buildings in Europe. But what exactly a broch is, or was, still remains unclear. In the 21st-century, however, it’s drawing night visitors like a congregation.

Brochs are a Scottish phenomenon. Hundreds have been registered by Historic Environment Scotland, almost all in the north and north-west, mostly at the coast, but most are just mounds of overgrown rubble. Only Mousa still stands complete. It’s worryingly close to the shore, but the land has eroded since it was built. The land has eroded, 2,000 Shetlandic winters have blown over it, but it’s still there, 13 metres high, and we’re walking towards it in the middle of the midsummer night, as snipe call, and seals sing a mournful song. When we reach it, the broch seems very tall in the half-light, stolid and resolute. Its walls are beautifully made, stone on stone. Local stone, no mortar: this building is an expression of the island itself. ‘I was made here of this place,’ it says, but that’s all it admits to. Now at just a few feet away, we can see that its ancient stones are softened by whiskery lichen, just visible in the half light.

Tall, thick, inscrutable and round. No windows, of course, but on the seaward side there is a single low and irresistible entranceway.

You have to duck, and feel your way in along a dark passageway. Halfway in are holes where a bar would have slid behind a door, and after two or three metres more you can stand, finding yourself at the bottom of a great stone well. A cylinder of stone. Just a few fellow visitors have come inside, speaking in whispers, and we’re all perched on a stone bench at the edge of a central circular yard. It’s gloomy, probably even in daylight, the sky is a disc of grey high above. Again, it’s the stonework that amazes. Mousa has the classic broch features: its base is monumental but built on that solid foundation are double walls, one inside the other with a stack of ‘galleries’ running up the landward side – openings in the inner wall which lighten the structure. Up they go, eight or nine. On the ground floor are dark and eerie openings: the lower walls are so thick little rooms or cells have been built into them. There’s a hearth space, a shallow tank, a smell of stone and earth, and silence. And of course, through one of the openings let into the wall, access to a tight stone stairway between the two skins, like a secret.

Who Built Scotland: A History of the Nation in Twenty-Five Buildings, by Kathleen Jamie, Alexander McCall Smith, Alistair Moffat, James Robertson and James Crawford, is available for pre-order. It will be published on 14 September, priced £20.