‘Her mature way of working was essentially late Pre-Raphaelite yet boldly Celtic in its colour and pattern.’

In this book published by National Galleries of Scotland we explore the life and influential art of Phoebe Anna Traquair, whose vibrant modern style helped catalyse the birth and flourishing of women artists in the nineteenth century.

Phoebe Anna Moss was born in Dublin, the sixth of the seven children of Dr William Moss and Teresa Richardson. At the end of her training at the Royal Dublin Society School of Art she was invited by her tutor to illustrate the research papers of Dr Ramsay H. Traquair, a Scots palaeontologist employed by the Royal Dublin Society. She married him in 1873 and henceforth would prepare all his fossil drawings. In 1874 the couple, then expecting the first of three children, settled in Edinburgh on Ramsay’s appointment to the Museum of Science and Art.

Traquair’s Edinburgh art initially took the form of domestic textiles, but in 1885 she was invited by the Edinburgh Social Union to decorate the walls of the Royal Edinburgh Hospital for Sick Children’s mortuary chapel. This kick-started a professional career which would always straddle fine art and craft. She painted two other Edinburgh buildings – the Song School of St Mary’s Episcopal Cathedral (1888–92) which made her name in London (thus gaining her husband’s respect) and the vast Catholic Apostolic church in Mansfield Place (1893–1901, now the Mansfield Traquair Centre) – plus two English churches in the 1900s and 1920s. 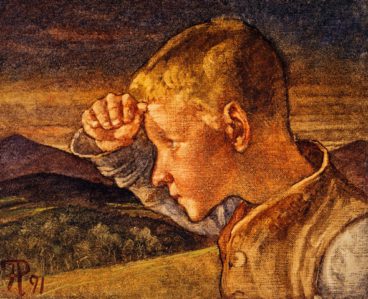 Physically petite and of a determined temperament, Traquair often sought out people with whom to debate ideas. She wrote to the famed critic John Ruskin to seek advice about illuminating manuscripts in 1887, and soon after befriended John Miller Gray, the first curator of the Scottish National Portrait Gallery, and fellow artist William Holman Hunt.

At the height of her career, in the 1890s, when she established her reputation as Scotland’s leading Arts and Crafts artist, Traquair used every available hour to make her walls ‘sing’, to work alone on book art or with fellow bookbinder friends at the Dean Studio in Edinburgh’s West End, or, late at night, to stitch art embroideries at home. She showed at the Royal Scottish Academy (RSA) from 1893 and the Glasgow Institute of Fine Arts (Royal Glasgow Institute of Fine Arts from 1896) in 1895, a year when she also exhibited at Glasgow’s massive Arts & Crafts Exhibition. In addition, she regularly contributed to London’s Arts & Crafts Exhibition Society from 1899, joining it in 1903, and to smaller Scottish craft displays, as well as at the World’s Fairs in Chicago in 1893, Paris in 1900 (with the Guild of Women Binders) and St Louis in 1904. W.B. Yeats noted that all her work narrated life’s journey. Drawing frequently on different cultures and much inspired by William Blake or Dante Gabriel Rossetti, her mature way of working was essentially late Pre-Raphaelite yet boldly Celtic in its colour and pattern. Perhaps less known nowadays are her commercial book designs and more ‘ordinary’ easel paintings.

The Awakening is one of the latter. Sourced in a sonnet from Rossetti’s The House of Life, Traquair here revisited both her illumination of 1898–1902 (National Library of Scotland) and her ‘awakening of the spirit’ panel (1895–6) in the Catholic Apostolic church. A vivid palette reflects both her recent illumination colours and her new-found medium of painted enamelling. It was later owned by Mrs Charlotte Barbour, a friend for whom a manuscript drawn from her own Song School border details (1897, Edinburgh University Collections) had been commissioned.

Having been turned down for professional membership of the RSA, she was eventually elected HRSA in 1920. Her illustrative art, long out of fashion, was rediscovered publicly in the 1990s with a major retrospective at the Scottish National Portrait Gallery in 1993.

Modern Scottish Women: Painters and Sculptors 1885-1965 by Alice Strang is out now published by National Galleries of Scotland priced £18.95.

The Road to Givenchy: The Story Behind the Story

‘Her sisters lost their boyfriends and sweethearts in the mud and gore of France.’