‘I feel like this genealogical research gives a second life to people who lived uncelebrated lives.’

The National Museum of Scotland’s current exhibition, Embroidered Stories is on now and runs until 21st April 2019. As ever, they have produced a beautiful book to coincide with the exhibition, which is a fascinating social history as well as a stunning collection of needlework. 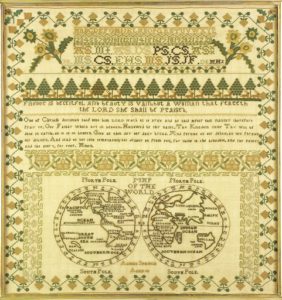 Double hemisphere world maps were often included in atlases, and one of these was probably the basis for Agnes Spence’s work. Samplers representing the whole world, like this one, were less common than maps of the nation or county where the maker lived. Note the host of names for the Caribbean islands, reflecting their strategic and economic importance to the British Empire. Australia at this time was named New Holland, and ‘Van Diemans Land’ refers to the island of Tasmania; both were also British colonies in the 1820s.

Agnes’ parents, Andrew Spence and Marjory Isles, were married on 22 November 1807 in Monifieth parish, Angus. Agnes was baptised on 27 June 1816, one of nine siblings. Her father’s occupation is listed as a wood merchant in the 1841 Census. A tombstone in Dundee records that Agnes died in 1832,
aged just fifteen. 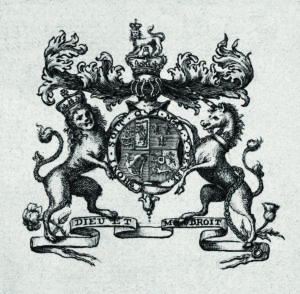 Katharine and Margret Sheriff were sisters, born in the village of Athelstaneford, East Lothian, in 1753 and 1755 respectively. They made near-identical samplers featuring the Ten Commandments and an unorthodox version of the coat of arms of Great Britain.

The rose and thistle springing from a single stalk symbolise the union of the crowns of England and Scotland. The position of the lion supporter on the left indicates that this was a form of the arms as used in England (in Scotland the unicorn appears on the left). This could mean the arms were copied from a coin minted in England.

Unusually the shield itself is incorrect: it does not show the House of Hanover, which should be included from the accession of George I (1714) to the death of William IV (1837). Instead we simply find the arms of France (three fleurs-de-lys), Scotland (a lion rampant), Ireland (a harp) and England (three lions passant) in the four quarters. This arrangement is itself irregular as, more typically, France and England would appear together in the first quarter. 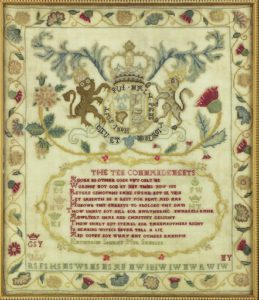 The omission of the arms of Hanover could be read as a statement of support for the exiled Stuarts, though by 1770 this seems highly unlikely. Perhaps the girls were copying an old coat of arms; or perhaps they just simplified the image to make it easier to stitch – the Hanoverian quarter would have required a far greater level of detail.

Katharine and Margret had six brothers and sisters, but Katharine is the only one whose later life can be traced. In 1775 she married Robert Scott, a minister in nearby Haddington, and the couple had five children. 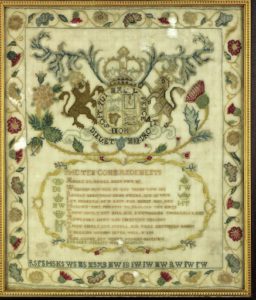 Caption: The coat of arms of Great Britain
As used in England under George III, with England and Scotland in the first quarter, France in the second, Ireland in the third, and Hanover in the fourth. Taken from William Maitland, The History of Edinburgh, 1753.
© National Museums Scotland

Embroidered Stories: Scottish Samplers by Helen Wyld is published by The National Museums of Scotland, priced £9.99

I Ran With The Gang: Alan Longmuir Remembers

‘I knew straight away that it was a hit, possibly a number one. For me, it had everything: a buoyant …

The Dog That Saved Christmas

‘At last he knew what Christmas was for. It wasn’t for blow-up snowman or fairy lights or school per …