PART OF THE Tricks and Treats ISSUE

‘But it was ‘Tam o’ Shanter’ that really captured my imagination, and I found the story of witches at Halloween both spellbinding and spine-chilling all at the same time.’

Victoria Williamson has loved Burns’ poetry since she was in school, and her latest book for children Hag Storm takes ‘Tam o’ Shanter’ as its spooky inspiration. Here she tells us how Burns has influenced her throughout her life.

The dedication at the front of my new children’s book reads, ‘For Mrs Stewart, who first introduced me to the poetry of Robert Burns during a memorable year in Primary Four.’ It was during this year when I was eight, that I first learned about the poetry of Robert Burns, and seeds of the story that would grown into Hag Storm over thirty years later were sown. My school ran an annual Burns competition every January, supported by the Burns Federation (now the Robert Burns World Federation). We studied the poetry of Burns, discovering more about the meaning of Scots words and the history of the period, before learning to write and recite his poems. To this day, I can still remember the inspirational ‘A Man’s a Man for a’ That’, the stirring ‘Scots Wha Hae’, and the poignant ‘To a Mouse.’ But it was ‘Tam o’ Shanter’ that really captured my imagination, and I found the story of witches at Halloween both spellbinding and spine-chilling all at the same time. 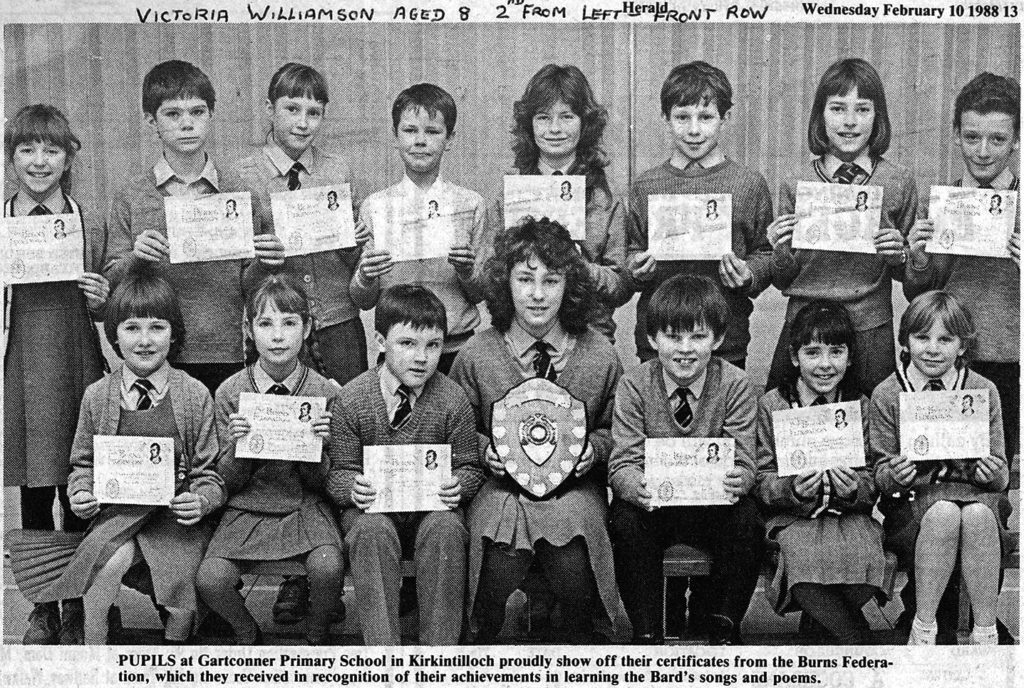 I’ve always loved autumn ever since I was a young child. Some of my earliest memories are of kicking up the red and orange leaves that covered the path on the way to drop my older brother off to school when he started primary one. Just up the hill from our school in Kirkintilloch was a farm estate full of ruined Victorian buildings, an overgrown walled garden, and spooky forest walks. In the autumn it was a place of magic. When the sun was shining, gleaming conkers were piled on the ground, the biggest ones hanging tantalisingly out of reach high up in the old horse chestnut trees. But come late afternoon, the sun would drop low over the fields, shrouding the forest trails in darkness and mystery. It was the perfect place to imagine witches holding secret meetings by moonlight, and looking out of my classroom window in primary four, I could see where the tree line began at the edge of the fields. I’d never been to Alloway, so when we began studying the poem that told the tale of Tam’s encounter with the witches in the Auld Kirk, and his desperate dash to safety on his horse across the Brig o’ Doon, I imagined it all taking place in the forests at the top of the hill. In my head the Auld Kirk was one of the ruined buildings in the Gartshore Estate, and the bridge was a crossing over the Luggie river that ran through Kirkintilloch. 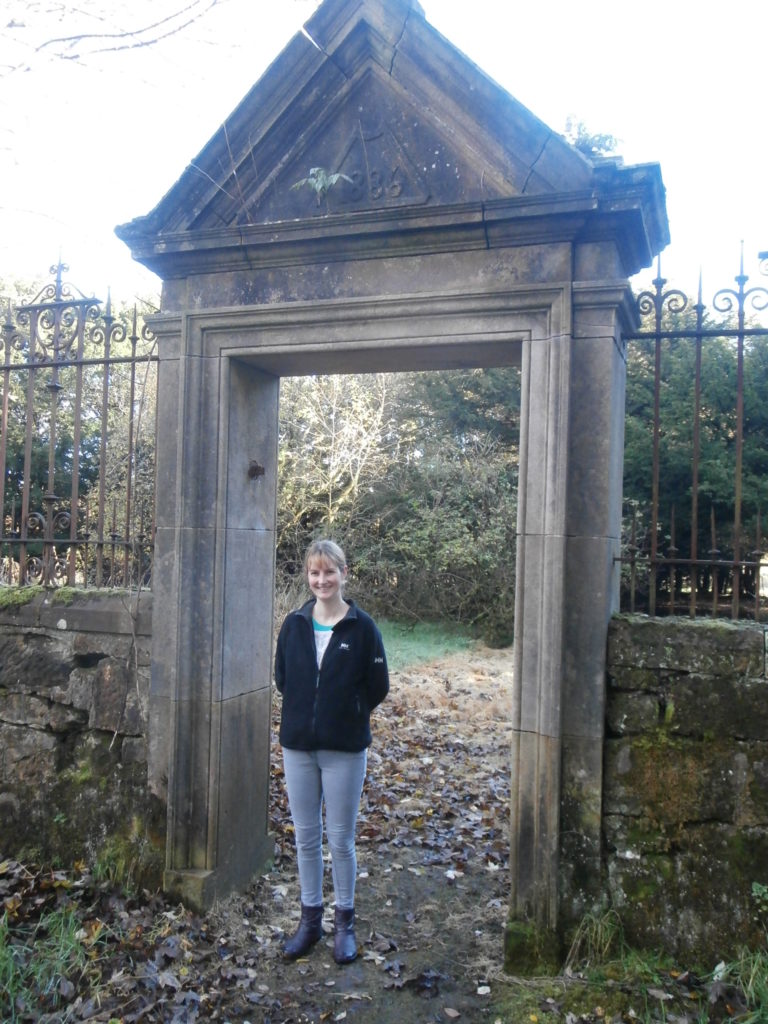 I didn’t get to see the ‘real’ scene of Tam’s flight from the witches until I visited Alloway for the first time in 2003. Learning about his early life in the old cottage turned-museum where Burns was born, all of the poems I’d studied as a child seemed to come to life, sparking the idea of a  novel about ‘Rab’ not as an adult, but as a boy growing up in a world full of folklore and tales of the supernatural told round the kitchen fire on dark nights. Despite the fact that it was a warm June day, the Auld Kirk seemed full of full of mystery and suspense, and the bridge over the River Doon looked just as dramatic in the sunlight as I’d imagined it by the light of the Halloween moon all those years ago when I’d first heard about Tam’s dash for the keystone.

I still have the Burns competition certificates and photographs from my school years, and even the original short summary I wrote of ‘Tam o’ Shanter’ when I was in primary four. But the most important keepsakes from my years studying Burns in primary school are my love of his poetry, and the story of Rab as a boy that was sparked by ‘Tam o’ Shanter’ and my first visit to his birthplace museum. Researching the life of Burns for my book has led to a desire to discover more about the historical and social contexts that influenced his poetry. I recently began a course through the University of Glasgow’s Centre for Robert Burns Studies which looks at the life, works and legacy of ‘the Bard’, and for anyone who would like a chance to explore his work further online, they also run a wonderful free course twice a year in January and July: 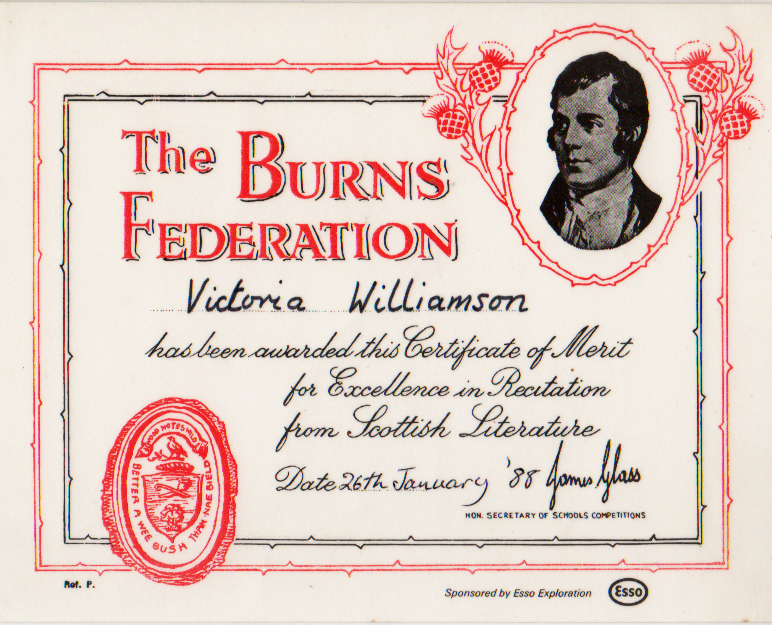 I’m hoping that my retelling of Rab’s early life which is based partly on historical research, partly on ‘Tam o’ Shanter’, and partly on my own wild imaginings of Halloween, will help children discover a love of Burns for themselves. It’s thanks to my teachers, and to the Burns Federation, that I got the chance to learn about Burns and his poetry, and without that early introduction, this book would never have been written. In recognition of that, and in order to support the great work that’s done to promote children’s appreciation of the poetry of Burns in schools, twenty percent of my author royalties for Hag Storm will be donated to the Robert Burns World Federation.

Hag Storm by Victoria Williamson is published by Cranachan, priced £7.99.

‘She heard of talking chickens, eagles with sparkling, vibrant feathers and a magic needle to whom t …

‘I revisit myself sat playing with a rosy-cheeked infant. I paint it in my mind as a warm and happy …