PART OF THE Sweet Inspiration ISSUE

Travel back in time – around 170 million years – to meet Dugie, the long-necked dinosaur who lives on the Isle of Skye. Separated from his family during a storm, it’s a story of bravery, friendship and… dinosaurs! Author Anna Brusatte takes BooksfromScotland through their inspiration for travelling so far back in time to create Dugie the Dinsoaur.

The recent glorious weather is unusual for Scotland in March. 170 million years ago in the Jurassic period, it may not have been quite so odd! Our upcoming children book, Dugie the Dinosaur: Scotland’s Sauropod takes place in this world. The weather would have still been wet, but Scotland would have been so much warmer—subtropical! Before you yearn for these long-ago bygone days, it’s important to note that this world would have also been filled with lots of fearsome dinosaurs. And some cute ones too. 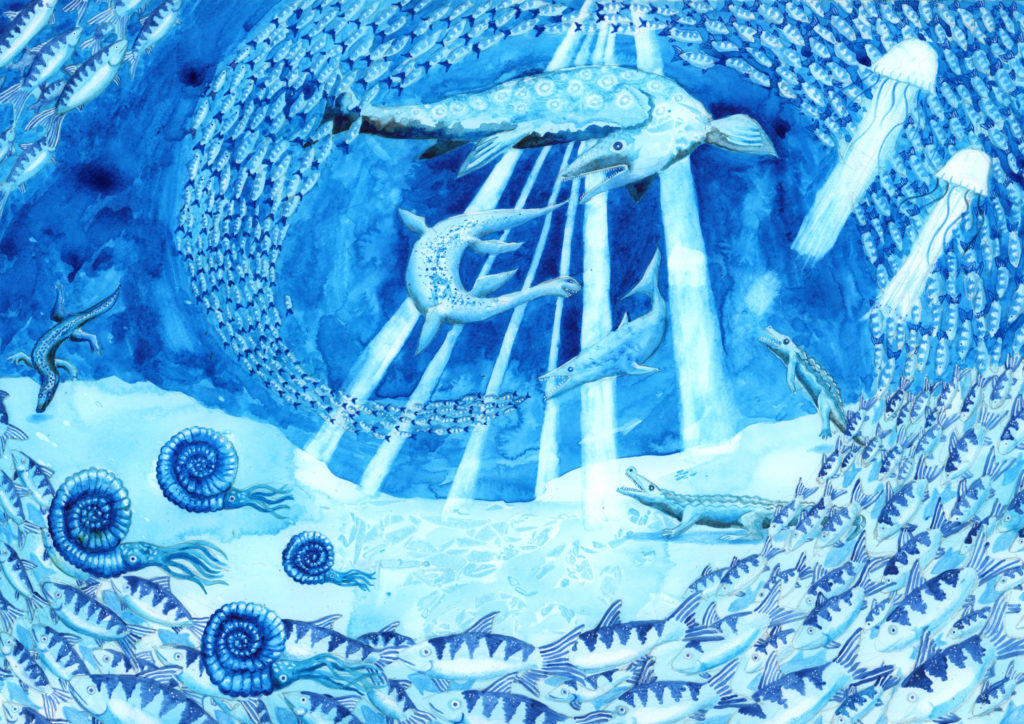 Our story is a beautifully illustrated (by Shalla Gray) tale of a long-necked dinosaur named Dugie and his friend Scottie the stegosaur and Maggie the pterodactyl. Most importantly, the book is inspired by real fossils of the creatures that roamed Scotland millions of years ago, some of which have been found by Steve and his team of fellow palaeontologists at the University of Edinburgh. These finds inspired me (Anne) to write a children’s book about these amazing animals; having a dinosaur expert for a husband allowed the fun story to be educational and accurate at the same time!

Often when thinking of dinosaurs, people’s minds go to deserts and dusty old bones. Diplodocus and Stegosaurus are some of the most famous, although they are North American dinosaurs. But in much the same way that our Edinburgh-born son has American cousins, these dinosaurs had Scottish relatives. Fossils have been found of smaller stegosaurs on the Isle of Skye, which is the best place to find dinosaurs in Scotland. While dinosaurs thundered across the land, other creatures controlled the skies and water. 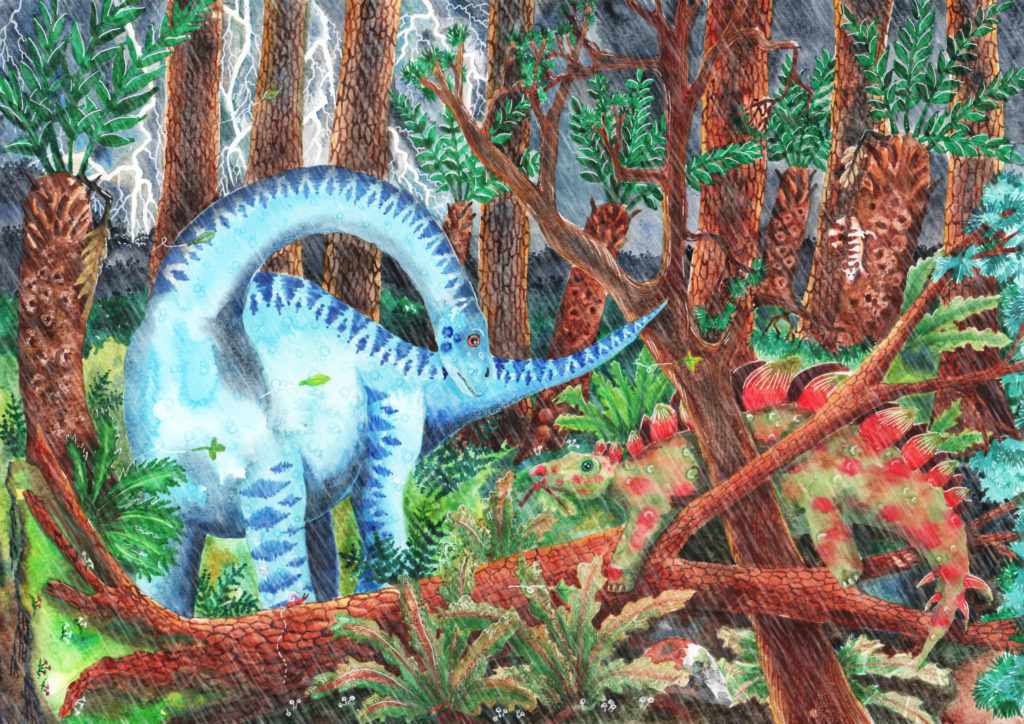 A gorgeous skeleton of a pterosaur from Skye, discovered by one of Steve’s students, was recently unveiled to the world at the National Museum of Scotland – this is the inspiration for Maggie the pterodactyl. Bones of huge sea creatures with hundreds of teeth have been found; they were a species called Dearcmhara (pronounced Yark-vara). They were 4 meters long, about the size of a speed boat, and dangerous carnivores. In 2015, Steve and his team gave this animal a Gaelic name to pay homage to its Scottish roots.

Perhaps one of the most interesting types of fossils in Scotland are more unusual to the lay person. Palaeontologists often look for bones and teeth, and these are called body fossils. In 2015, Steve’s team discovered over 100 fossil footprints and handprints made by long-necked sauropods—the inspiration for our main character Dugie—that were made in a Jurassic lagoon. These are known as trace fossils because they are the traces a creature has left behind (think of a lizard leaving a trail as it runs through sand). Imagine these dinosaurs walking along through soft mud in the lagoons, and then their footprints being quickly covered by sand. This dried and hardened before they could be washed away by the tides or blown away by the winds. More layers of sediments buried the original layer and it gradually became compacted together to form rocks; preserving the footprints for around 170 million years. Remarkable!

The footprints would have belonged to enormous long neck dinosaurs, the star of our story. They were Scottish cousins of the famous Brontosaurus and Diplodocus. The adults were about 15 meters long and weighed about 15 tons—the size of three elephants put together! Dugie is a baby but would have been more than capable of taking care of himself against some of the carnivorous dinosaurs—smaller cousins of Tyrannosaurus rex—whose fossils are also found on Skye.

It is not hard to be inspired by exciting finds on your doorstep and, for us, it’s very exciting to bring real scientific facts to inspire a sweet children’s story. 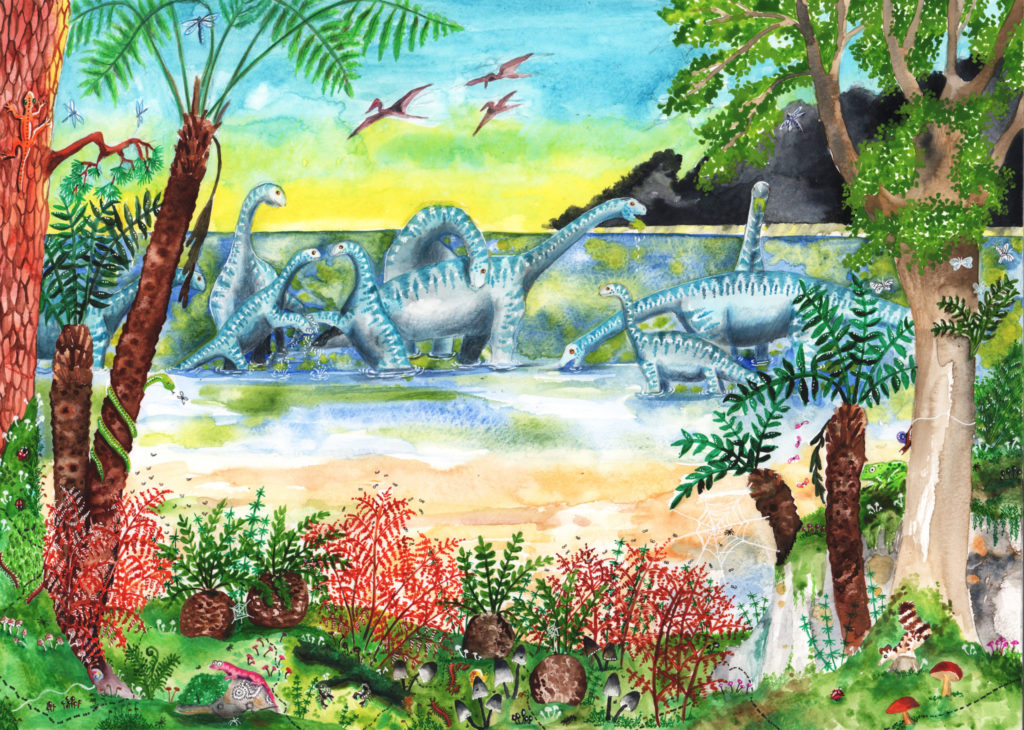 Dugie the Dinosaur: Scotland’s Sauropod by Anne and Steve Brusatte is illustrated by Shalla Gray and published by Curly Tale Books, priced £8.99.

The Book… According to Ali Smith

‘What I most love about books and reading is that they’re not about how I see myself, they’re always …

‘Despite the hardships and horror, the fear and danger present in the novel, Stuart has captured wha …