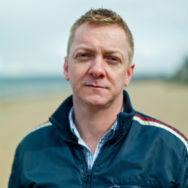 Douglas Johnstone is a writer and freelance journalist, based in Edinburgh. Originally from Arbroath, he studied physics at University, and has a PhD in experimental nuclear physics. Johnstone spent four years designing radar and missile guidance systems for planes and helicopters, but harboured ambitions to be a writer. After taking a diploma in journalism, he now writes and reviews for a number of newspapers and magazines.

His first novel, Tombstoning, was published by Penguin in 2006. Doug Johnstone is also a singer, song-writer and instrumentalist with the band Northern Alliance. His experiences in the band lead to his second novel, The Ossians, and Northern Alliance produced an album of the same name.

Doug Johnstone was also a writer-in-residence at the University of Strathclyde 2010-2012. He lives in Edinburgh with his wife and two children. His most recent novel is Crash Land.