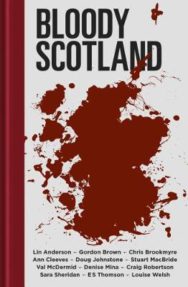 In Bloody Scotland twelve of Scotland’s best crime writers use the sinister side of the country’s built heritage in stories that are by turns gripping, chilling and redemptive. Stellar contributors Val McDermid, Chris Brookmyre, Denise Mina, Ann Cleeves, Louise Welsh, Lin Anderson, Doug Johnstone, Gordon Brown, Craig Robertson, E S Thomson, Sara Sheridan and Stuart MacBride explore the thrilling potential of Scotland’s iconic sites and structures. From murder in an Iron Age broch and a macabre tale of revenge among the furious clamour of an eighteenth century mill, to a dark psychological thriller set within the tourist throng of Edinburgh Castle and a rivalry turning fatal in the concrete galleries of an abandoned modernist ruin, this collection uncovers the intimate – and deadly – connections between people and places. Prepare for a dangerous journey into the dark shadows of our nation’s buildings – where passion, fury, desire and death collide.