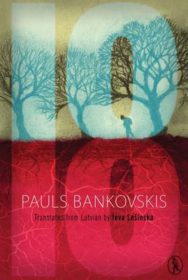 As the First World War comes to an end, chaos takes over in much of Europe and even the victors sense that the old certainties have been lost in the massacre. In Latvia it appears that two centuries of Russian rule are coming to an end, but other powers and destabilising factors persist. Pauls Bankovskis’s novel examining this most important of years in his country’s history reveals how a new republic emerged from disorder and chance, gradually but also erratically. Painstaking in his research, he even walked himself the full length of the escape route to Finland taken by his protagonist. This is the story of a year and its far from unified people. Two different Latvias, almost a century apart, one looking uncertainly to the future and the other uncomprehendingly to the past, inhabit very different eras and use each other to inform their own actions.

""Two Latvians, two different periods, with almost a century between them. One of them, in the autumn of 1917, is not entirely sure whether it is worth it for Latvians to attempt and establish their own country. There is still time until November 18th, and his thoughts on it could change, if one could give him an answer to the question 'Why?' The second comes upon this same question today. That which seemed already self-evident to many in 1918 suddenly doesn't seem that way anymore. This is a story about an improbable encounter between these two characters."" – Text from the Annual Latvian Literature Award

Born in Ligatne, Latvia in 1973, Pauls Bankovskis is a prolific writer and novelist. In decade he has published ten novels, two short story collections, a children’s book and a work of non-fiction. His books have been translated into English, French, Russian, Finnish, Swedish, Czech and Lithuanian. He studied glasswork at the Riga School for Applied Arts and philosophy at the University of Latvia (1992-1996).