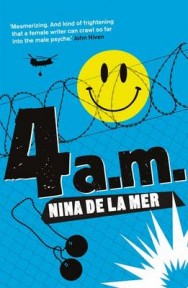 Set in the early 1990s on a British army base, 4 a.m. tells the story of Cal and Manny, soldiers posted to Germany as army chefs. Bored and institutionalised, the pair soon succumb to the neon temptations of Hamburg’s red-light district, where they dive into a seedy world of recreational drugs and all-night raves. But it is only a matter of time before hedonism and military discipline clash head on, with comic and poignant consequences. Life-affirming raving soon gives way to gloomy, drug-fuelled nights in fast-food restaurants, at sex shows, and in Turkish dive bars. As a succession of events ratchets up the pressure on Cal and Manny their friendship is tested, a secret is revealed, and a shocking betrayal changes one of their lives forever. Drawing on personal experience and extensive research, 4 a.m. is an iconic novel of friendship and betrayal, hedonism and military discipline. Driven by two distinctive voices, and written in a lively and buzzing style, Nina de la Mer’s debut novel holds a mirror up to youth culture at the end of the twentieth century. The reflection is not always a flattering one.

Bookgroup.info: 'Set on a British army base and in the anarchic club scene of '90s Hamburg, 4 a.m. tells the story of Cal and Manny, squaddies and diehard ravers, whose individual voices resonate in a sparkling debut novel of friendship, love and betrayal. An anthem for the E generation.' John Niven: 'Mesmerizing. And kind of frightening that a female writer can crawl so far into the male psyche.'

Nina de la Mer was born in Scotland and grew up there and in Brighton, where she now lives with her husband and daughter. Her nonfiction book The Modern Maiden’s Handbook, a satirical take on the woman’s self-help genre, was published in 2007 by Portico. 4 AM, shortlisted for the West Dean Writer’s Retreat Competition, is her first novel.