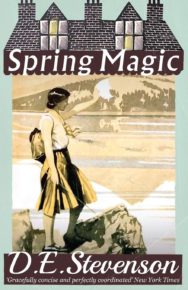 Frances was free. She had enough money for her holiday, and when it was over she would find useful work. Her plans were vague, but she would have plenty of time to think things out when she got to Cairn. One thing only was certain—she was never going back to prison again.

Young Frances Field arrives in a scenic coastal village in Scotland, having escaped her dreary life as an orphan treated as little more than a servant by an uncle and aunt. Once there, she encounters an array of eccentric locals, the occasional roar of enemy planes overhead, and three army wives—Elise, Tommy, and Tillie—who become fast friends. Elise warns Frances of the discomforts of military life, but she’s inclined to disregard the advice when she meets the dashing and charming Captain Guy Tarlatan.

The ensuing tale, one of D.E. Stevenson’s most cheerful and satisfying, is complicated by a local laird with a shady reputation, a Colonel’s daughter who’s a bit too cosy with Guy, a spring reputed to guarantee marriage within a year to those who drink from it, and a series of misunderstandings only finally resolved in the novel’s harrowing climax.

Born in Edinburgh in 1892, Dorothy Emily Stevenson came from a distinguished Scottish family, her father being David Alan Stevenson, the lighthouse engineer, first cousin to Robert Louis Stevenson. In 1916 she married Major James Reid Peploe (nephew to the artist Samuel Peploe). After the First World War they lived near Glasgow and brought up two sons and a daughter. Dorothy wrote her first novel in the 1920’s, and by the 1930’s was a prolific bestseller, ultimately selling more than seven million books in her career. Among her many bestselling novels was the series featuring the popular “Mrs. Tim”, the wife of a British Army officer. The author often returned to Scotland and Scottish themes in her romantic, witty and well-observed novels. During the Second World War Dorothy Stevenson moved with her husband to Moffat in Scotland. It was here that most of her subsequent works were written. D.E. Stevenson died in Moffat in 1973.