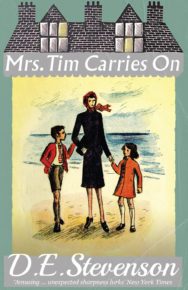 There is so much War News in News Bulletins, in Newspapers, and so much talk about the war that I do not intend to write about it in my diary. Indeed my diary is a sort of escape from the war . . . though it is almost impossible to escape from the anxieties which it brings.

Bestselling author D.E. Stevenson’s charming fictional alter-ego, Hester Christie—or “Mrs. Tim” as she is affectionately known to friends of her military husband—was first introduced to readers in Mrs. Tim of the Regiment, published in 1932. In 1941, Stevenson brought Mrs. Tim back in this delightful sequel, to lift spirits and boost morale in the early days of World War II.

With her husband stationed in France, Hester finds plenty to keep her busy on the Home Front. From her first air raid and a harrowing but hilarious false alarm about a German invasion, to volunteering at the regiment’s “Comforts Depot,” guiding the romantic destinies of her pretty houseguest and an injured soldier, and making a flying visit to a blacked-out, slightly bedraggled London with its fighting spirit intact, Mrs. Tim does indeed carry on—in inimitable style.

Mrs. Tim returns in two subsequent novels, Mrs Tim Gets a Job (1947) and Mrs Tim Flies Home (1952), all back in print for the first time in decades from Furrowed Middlebrow and Dean Street Press. This new edition features an introduction by Alexander McCall Smith.