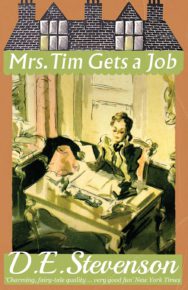 Home > Fiction from Scotland > Mrs. Tim Gets a Job

Mrs. Tim Gets a Job

Miss Clutterbuck would like me to run the bar—no, it can’t be that—run the car, which has seen its best days but is still useful for shopping. Grace has told her I am patient and tactful, so (as she herself is neither the one nor the other) she thinks I am the right person to look after the social side.

With husband Tim stationed in Egypt and her children at boarding-school, Hester Christie—affectionately known as “Mrs. Tim” and based loosely on D.E. Stevenson herself—finds herself at loose ends, until her friend Grace takes her at her word and finds her a job with the formidable Erica Clutterbuck, who has opened a new hotel in the Scottish Borders.

Once there, Hester’s initial ambivalence disappears in a swirl of problems and situations with hotel guests and old friends alike, including serving as fortune teller at the local fête and aiding and abetting romantic schemes, not to mention the reappearance of the debonair Tony Morley.

This volume, first published in 1947, is a sequel to Mrs. Tim Carries On and brings Hester into the immediate post-war years. Her exploits continue in Mrs. Tim Flies Home. All three titles are back in print for the first time in decades from Furrowed Middlebrow and Dean Street Press. This edition includes a new introduction by Alexander McCall Smith.