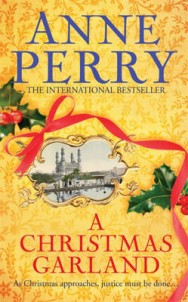 1857. After the fire of mutiny has swept through British India, young Lieutenant Victor Narraway arrives at a battered military base at Cawnpore. It is just two weeks before Christmas, but no one is able to celebrate: they have been betrayed. A soldier under arrest for dereliction of duty has killed a guard and escaped to join the rebels, taking crucial information that led to the massacre of nine men on patrol. Someone must have helped him, and medical orderly John Tallis is the only man unaccounted for at the time. He is now on trial for his life, and Narraway is commanded to defend him. Narraway knows that his is an impossible task. The British Army needs justice to be carried out in full, and there seems no doubt of Tallis’s guilt. But Narraway cannot see any motive for his actions. Will an innocent man hang before Christmas?

Reviews of A Christmas Garland

Anne Perry is a New York Times bestselling author noted for her memorable characters, historical accuracy and exploration of social and ethical issues. Her two series, one featuring Thomas Pitt and one featuring William Monk, have been published in multiple languages. Anne Perry has also published a successful series based around World War One and the Reavley family, and the recent standalone novel The Sheen on the Silk. Anne Perry was selected by The Times as one of the twentieth century’s ‘100 Masters of Crime’.