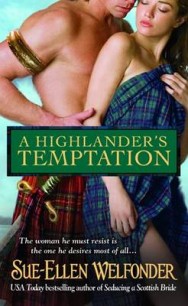 Darroc MacConacher’s clan has been driven from their land by the powerful MacKenzie family. The MacConachaers now live on a remote isle, where Darroc, as chief and leader, plots the revenge he hopes will restore his family’s name and honour. When the tides of fate land Arabella MacKenzie in his arms, Darroc can’t help but admire her strength and bravery, and much to his annoyance, he also notices her beauty. Arabella is the daughter of Darroc’s greatest foe and a relationship with her is out of the question. Lady Arabella doesn’t believe in grand passions. Her father has scared away every suitor who ever called on her and now none even bother to try. Finally, Arabella decides to take her life into her own hands by demanding to visit the islands that are part of her dowry. When disaster strikes at sea, Arabella is rescued by Darroc, and she is completely unprepared to discover true love in the arms of an enemy.

Reviews of A Highlander’s Temptation

Praise for A HIGHLANDER'S TEMPTATION: "Welfonder's return to Kintail and its Highlanders offers another delightfully swashbuckling adventure for hero and heroine alike as she continues to weave magical tales of redemption, love, and loyalty amid the challenges of life in glorious, perilous mid-fourteenth-century Scotland." Booklist"