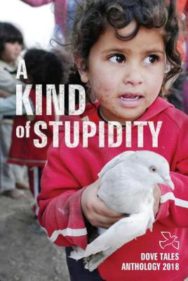 Home > Uncategorized > A Kind of Stupidity

A Kind of Stupidity

Dove Tales peace charity was formed in Scotland in 2017 as a response to the growing instability of a world where established institutions were being riven apart, where politicians were using their people as pawns in a game of self-aggrandisement, and where the gap between rich and poor was greater than it has ever been. Our aim is to use the power of art to question the militarisation of our culture and to oppose the devastation caused by the arms trade. The work in this anthology, A Kind of Stupidity, comes from poets, storytellers and non-fiction writers and ranges from the recorded past to the imagined future, from Northern Ireland to Palestine to the Yemen. It interrogates history and by questioning, bearing witness to and challenging war, it tries to play a small part in reshaping it. `Never doubt that a small group of thoughtful, committed citizens can change the world – indeed, it’s the only thing that ever has.’ -Margaret Mead