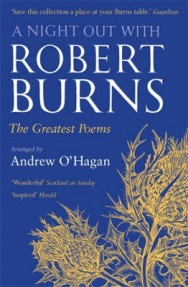 A Night Out with Robert Burns: The Greatest Poems

The Scottish poet Robert Burns has been idolised and eulogised. He has been sainted, painted, tarted up and toasted. He is famous as the author of “Auld Lang Syne”, and he has long since become the patron saint of the heart-sore and the hung-over. But what about the poems? Beneath the cult of Burns’ Nights and patriotic yawps, there is the work itself, among the purest and most truthful created in any age.This is a Burns collection like no other: a reader’s edition, made for the pleasure of reading. Novelist and Scottish essayist Andrew O’Hagan comes into company with the poet who has mattered most to him in his writing life. He selects the poems for the reader, and converses with the work, offering fragments and distilled commentary of his own.The effect is explosive, giving us Robert Burns at his very best – a political Burns, a poet who can name hypocrisy and intolerance, and point directly to the human heart.

Andrew O’Hagan was born in Scotland in 1968. He is author of The Missing and Our Fathers, which was shortlisted for the Booker Prize and won the Holtby Prize for Fiction. With his second novel, Personality, he won the E.M. Forster Award from the American Academy of Arts and Letters and was named one of Granta’s Best of Young British Novelists. His most recent novel, Be Near Me, was longlisted for the Booker Prize. Andrew O’Hagan’s work is published in the London Review of Books, Daily Telegraph, the New York Review of Books and the New Yorker.