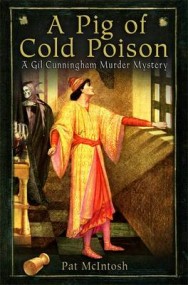 Home > Fiction from Scotland > A Pig of Cold Poison

A Pig of Cold Poison

Although he was watching closely when the mummer was poisoned, it took Gil Cunningham several days and three more poisonings to work out how it was done. Danny Gibson and Nanty Bothwell, rivals for the affections of Agnes Renfrew, the apothecary’s pretty daughter, are also good friends. When they both take part in the festive play at the house of Gil’s sister Kate, it ends in Danny’s death, apparently by poison from his friend’s flask. So was it deliberate, and if not, why won’t Nanty defend himself? Why is Agnes’s eccentric brother Nicol so insistent that Nanty had the wrong flask, and why do none of the apothecaries in Glasgow recognize the poison it held? Gil, convinced Nanty is innocent, sets out to answer these questions and finds himself enmeshed in the tensions of the Renfrew household and the tangled relationships among the apothecary houses. And then a second and third death confuse matters further still, and bring Gil’s wife Alys into the investigation. Praise for Pat McIntosh: ‘McIntosh’s characterisations and period detail are first rate.’ Publishers Weekly ‘The next Cunningham adventure is to be welcomed.’ Historical Novels Review.’Will do for Glasgow in the 15th century what Ellis Peters and her Brother Cadfael did for Shrewsbury in the 12th.’ Mystery Readers Journal. ‘Lots of dramatic characterisation and detail on medieval Glasgow.’ Glasgow Herald. ‘McIntosh does a solid job of blending plot and period detail.’ Publishers Weekly, starred review.

Reviews of A Pig of Cold Poison

Praise for the Gil Cunningham series: "McIntosh does a solid job of blending plot and period detail."–"Publishers Weekly", starred review "Will do for Glasgow in the 15th century what Ellis Peters and her Brother Cadfael did for Shrewsbury in the 12th."–"Mystery Readers Journal"

Born and brought up in Lanarkshire, Pat McIntosh lived and worked in Glasgow before settling on Scotland’s West coast , where she lives with her husband and three cats.