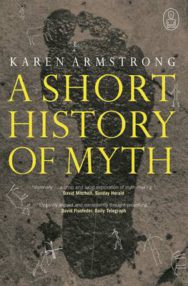 A Short History Of Myth

‘We are meaning-seeking creatures. Dogs, as far as we know, do not agonise about the canine condition, worry about the plight of dogs in other parts of the world, or try to see their lives from a different perspective. But human beings fall easily into despair, and from the very beginning we invented stories that enabled us to place our lives in a larger setting, that revealed an underlying pattern, and gave us a sense that, against all the depressing and chaotic evidence to the contrary, life had meaning and value.’Karen Armstrong’s concise yet compelling investigation into the history of myth takes us from the Palaeolithic period and the mythology of the hunters right up to the ‘Great Western Transformation’ of the last 500 years.She shows us that the history of myth is the history of humanity, and our stories and beliefs, our curiosity and attempts to understand the world, link us to our ancestors and each other. Myths help us make sense of the universe, and of ourselves. Armstrong’s characteristically insightful and eloquent book serves as a brilliant and thought-provoking introduction to myth in the broadest sense – and why we dismiss it only at our peril.

Reviews of A Short History Of Myth

Remarkable for its compressions, brevity and range, this book gives an account of myth from 20,000 years ago. * * The Times * * What Armstrong does in her skid over the millennia is make comparisons, connections and contrasts in a way that cannot fail to enlighten the general reader… She is expert on significance and practice… Her formulation works very well… What myth once did, novels now do; and her points about The Waste Land and Ulysses are well made. (Both hang on mythical frameworks; both came out in the same year, 1922.) Myths are narratives: as she eloquently says, we shouldn't be done with them yet. * * The Guardian * * Her elegantly argued and consistently thought-provoking essay is to men and women to imitate the powerful beings and experience divinity themselves. * * The Daily Telegraph * * Armstrong has provided a valiant and readable account, clearly and concisely written. * * The Independent * *

Karen Armstrong’s first book, the best-selling Through the Narrow Gate (1981), described her seven years as a nun in a Roman Catholic order. She has published numerous books, including A History of God, and In the Beginning: A New Reading of Genesis. Her more recent works include Islam: A Short History and Buddha, which was an international bestseller. Since 1982 she has been a freelance writer and broadcaster. She lives in London.