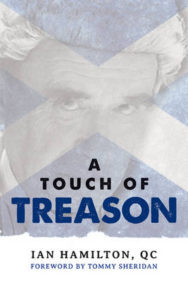 Home > Biography and Autobiography > A Touch of Treason

A Touch of Treason

This is the swashbuckling life story (so far) of one of Scotland’s greatest sons. Ian Hamilton, born the son of a Paisley tailor in 1925, who made himself world-famous on Xmas Eve, 1950, when he helped to remove the Stone of Destiny from Westminster Abbey and return it to its spiritual home of Scotland. This symbolic act was to set Hamilton along a lonely path as a solitary Scottish patriot whose actions have always stemmed from his deep love of his native land. He has never taken the easy option and his remarkable biography recounts episodes which encompass his many abilities and talents. Although renowned as a Queen’s Counsel, he has also been a publisher, printer, award-winning playwright, mussel farmer, pilot, museum curator and transatlantic yachtsman (failed). He was also the first man to canoe across Scotland. His legal responsibilities took him to countries as diverse as Canada and Zambia, from both of which he was expelled.Written in 1990 and now amended with an additional final chapter and a foreword by socialist agitator and independence campaigner Tommy Sheridan, Ian’s story is still pertinent in the run up to the independence referendum and a great deal of what he wrote in 1990 still resonates today. This popular biography is a cry for Scottish identity at a turning point in the nation’s history.