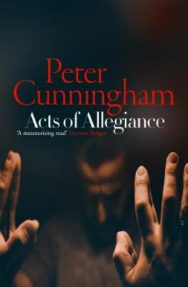 Senior Irish diplomat, Marty Ransom, is torn between duty to his country and loyalty to the Anglo-Irish tradition in which he was raised. In a land divided into north and south, Planter and Gael, Catholic and Protestant, Marty’s life has been spent walking a tightrope. When he meets Alison, a Home Office employee now transferred to the British embassy in Dublin, Marty’s fidelities are once again split. Lured ever deeper into the lethal world of counter-espionage, he finds himself in fatal conflict with his cousin and childhood friend. As this deadly endgame unfolds, Marty must choose between all which he loves and holds dear, and his allegiance to a past that remains just beyond his reach.

Reviews of Acts of Allegiance

`Unputdownable. A masterly story that excavates the deep ambivalence at the heart of Irish life.'-Joe Joyce, co-author of `The Boss'

Peter Cunningham is from Waterford in the south east of Ireland. He is the author of the Monument series, widely acclaimed novels set in a fictional version of his home town. His novel, The Taoiseach was a controversial best seller. He is a member of Aosdana, the Irish academy of arts and letters.