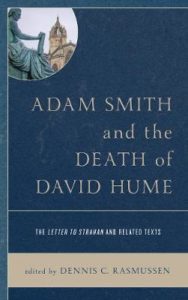 Home > Politics, Current Affairs and Ideas > Adam Smith and the Death of David Hume: The Letter to Strahan and Related Texts

Adam Smith and the Death of David Hume: The Letter to Strahan and Related Texts

The Letter to Strahan is an ostensible letter that Adam Smith wrote on the last days, death, and character of his closest friend, the philosopher David Hume, and published alongside Hume’s autobiography, My Own Life, in 1777. Other than his two books, it is the only work that Smith published under his name during his lifetime, and it elicited a great deal of commentary and controversy. Because of Hume’s reputation for impiety, Smith’s portrayal of his friend’s cheerfulness and equanimity during his final days provoked outrage among the devout. Smith later commented that this work “brought upon me ten times more abuse than the very violent attack I had made upon the whole commercial system of Great Britain”-meaning, of course, The Wealth of Nations. This is the first annotated version of this fascinating and important work.Along with the Letter to Strahan, the volume also includes Hume’s My Own Life, the work to which the Letter was a kind of companion piece; two personal letters related to the Letter; and three published responses to the Letter-two viciously critical and one generally favorable. A substantial editor’s introduction discusses the context, composition, publication, and significance of the Letter, along with the strong reaction that it provoked. Taken together, the works included in the volume provide an entertaining and accessible entree into some of the most controversial debates over religion and morality in the eighteenth century.

Reviews of Adam Smith and the Death of David Hume: The Letter to Strahan and Related Texts

This wonderful volume is the first to feature the most overlooked of the few works Adam Smith published during his lifetime, the Letter to Strahan, along with critical correspondence on the subject of it and its reception, as well David Hume's autobiographical essay. Taken together, the pieces in this short volume throw Smith and Hume's friendship, their philosophy, and their theology all into stark relief, and Rasmussen's excellent accompanying notes and references will be an exceedingly helpful guide to students and scholars alike. A truly valuable collection for anyone interested in exploring the interplay of morality and religion in eighteenth century philosophy. — Michelle Schwarze, University of Wisconsin This is an excellent collection of source texts with very helpful editorial guidance by Dennis Rasmussen. It will prove useful to scholars and students in the classroom. In addition, the material in this volume will be of interest to those curious about how to live a meaningful life in a commercial age. — Eric Schliesser, University of Amsterdam Dennis Rasmussen's edition of Adam Smith's elegant and intensely controversial "Letter to Strahan" and of six associated texts (including Hume's autobiographical My Own Life, with which the "Letter" was originally published), is a splendid contribution to our understanding of Smith, Hume, and their context. In his engaging and learned Introduction, Rasmussen discusses the "Letter" and also, among other things, the question of the relation between morality and religion that vexed so many readers of Smith's tribute to Hume. Rasmussen's meticulously prepared volume is essential reading for anyone interested in Smith, Hume, or the Scottish Enlightenment. — Charles Griswold, Boston University Dennis Rasmussen has brought Adam Smith's famous letter on the death of David Hume together with an array of fascinating and witty responses to Smith. He also provides excellent notes on these documents and an extremely illuminating introduction, making clear how important Hume's death was to generations of religious people in Britain. This is an invaluable collection for scholars, but also very accessible to the general reader. I look forward to using it in my undergraduate classes, to introduce the 18th-century debate over the relationship between religion and morality. — Samuel Fleischacker, University of Illinois, Chicago Rasmussen (political science, Tufts), a leading scholar on the relationship of Hume and Smith, here provides a small collection of works related to the death of David Hume. Included are Hume's brief autobiography and letters from Smith regarding Hume's life and death-in particular Smith's supposed Letter to Strahan. The collection is particularly interesting first because of the perceived tension between Hume's atheism and his calm and happy demeanor while facing his death, and second because Smith's description of Hume's character was perhaps as controversial as Hume's life itself, raising questions about the possibility of achieving moral excellence without the guidance of religion. . . this collection will be a useful resource for those researching Hume's death, or teaching a course on Hume or even the relationship of morality and religion. Additionally, the introduction and editorial comments are invaluable for understanding the historical context of these events and debates.Summing Up: Highly recommended. Upper-division undergraduates through faculty. * CHOICE *