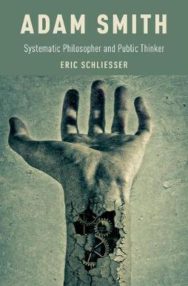 Eric Schliesser’s Adam Smith is the product of the author’s two decades’ reflection on the great Scottish Enlightenment. This book treats Adam Smith as a systematic philosopher. Smith was a giant of the Scottish Enlightenment with polymath interests. The book explores Smith’s economics and ethics in light of his other commitments on the nature of knowledge, the theory of emotions, the theory of mind, his account of language, the nature of causation, and his views on methodology. It places Smith’s ideas in the context of a host of other philosophers, especially David Hume, Rousseau, and Isaac Newton; it draws on the reception of Smith’s ideas by Sophie de Grouchy, Mary Wollstonecraft, and a host of other philosophers and economists to sketch the elements of and the detailed connections within Smith’s system. The book traces out Smith’s system and puts it in the context of Smith’s highly developed views on the norms that govern responsible speech. In particular, the book articulates Smith’s concerns with the impact of his public policy recommendations, especially on the least powerful in society .In so doing, the book offers new interpretations of Smith’s views on the invisible hand, the Wealth of Nations, his treatment of virtue, the nature of freedom, the individual’s relationship to society, his account of the passions, the moral roles of religion, and his treatment of the role of mathematics in economics. While the book offers a single argument, it is organized in modular fashion and includes a helpful index; readers with a more focused interest in Smith’s achievements can skip ahead to the section of interest.

Eric Schliesser is Professor of Political Science at the University of Amsterdam. He is editor of The Oxford Handbook of Newton (forthcoming, OUP), Ten Neglected Classics of Philosophy (2016, OUP), and Sympathy: A History (2015, OUP).