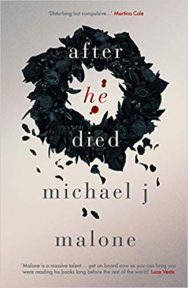 Home > Fiction from Scotland > Adventure/Thriller > After He Died

When Paula Gadd’s husband of almost thirty years dies, just days away from the seventh anniversary of their son, Christopher’s death, her world falls apart. Grieving and bereft, she is stunned when a young woman approaches her at the funeral service, and slips something into her pocket. A note suggesting that Paula’s husband was not all that he seemed…

When the two women eventually meet, a series of revelations challenges everything Paula thought they knew, and it becomes immediately clear that both women’s lives are in very real danger.

Both a dark, twisty slice of domestic noir and taut, explosive psychological thriller, After He Died is also a chilling reminder that the people we trust the most can harbour the deadliest secrets…

Reviews of After He Died

‘An expert plotter; twists and turns feel properly embedded in the story. It’s a tough high-wire act, balancing believability with surprise, but the author pulls it off with aplomb’ Doug Johnstone, Big Issue

‘A terrific read … I read it in one sitting’ Martina Cole

Michael J. Malone was born and brought up in the heart of Burns’ country, just a stone’s throw from the great man’s cottage in Ayr. Well, a stone thrown by a catapult, maybe. He has published over 200 poems in literary magazines throughout the UK, including New Writing Scotland, Poetry Scotland and Markings. His career as a poet has also included a (very) brief stint as the Poet-In-Residence for an adult gift shop. Don’t ask. BLOOD TEARS, his debut novel won the Pitlochry Prize (judge:Alex Gray) from the Scottish Association of Writers and when it was published he added a “J” to his name to differentiate it from the work of his talented U.S. namesake. He is a regular reviewer for the hugely popular crime fiction website www.crimesquad.com and his blog, May Contain Nuts can be found at http://mickmal1.blogspot.com/