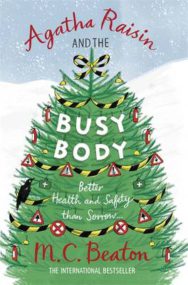 Home > Fiction from Scotland > Agatha Raisin and the Busy Body

Agatha Raisin and the Busy Body

Agatha Raisin has never been one for enforced holiday cheer, but her friendly little village of Carsely has always prided itself on its traditional Christmas festivities. But this year the bells will not be ringing out Silent Night as Mr John Sunday, an officer with the Cotswold Health and Safety Board, has chosen Christmas as the time to crack down what he sees as gross misconduct by every man, woman, and child in the vicinity. The village shop is told it can no longer have wooden shelves which have been there since the time of Queen Victoria ‘in case someone is inflicted with a splinter’. The village school is ordered to leave lights on at night ‘to prevent unauthorized intruders from tripping in the dark’. And children are warned to not play with ‘counterfeit banknotes’ after passing around toy money in the playground. But finally Mr Sunday goes too far when he rules that there cannot be a Christmas tree atop the church tower this year. Soon after the decree and just before Christmas, Agatha is sipping a cup of tea and trying to stay awake as minute by minute of the Carsely Ladies Society meeting at the vicarage drones on when a sudden scream wakes her from her stupor.The ladies rush out of the building and into the garden to find Sunday lying face down in the petunias, very much dead. Agatha is instantly on the case, but with so many people having threatened the life of the victim, it’s almost impossible to know where to start. Praise for the “Agatha Raisin” series: ‘M C Beaton has created a national treasure…”Agatha Raisin” is the strongest link’ – Anne Robinson. ‘M C Beaton’s imperfect heroine is an absolute gem’ – “Publishers Weekly”. ‘Clever red herrings and some wicked unfinished business guarantees that the listener will pant for a sequel’ – “The Times” audiobook review. ‘The Miss Marple-like Agatha is a refreshingly sensible, wonderfully eccentric, thoroughly likeable heroine’ – “Booklist”.

This is M.C. Beaton’s 21st Agatha Raisin mystery to date. She has written 25 Hamish Macbeth tales, which Constable & Robinson are currently reissuing, as well as a quartet of Edwardian murder mysteries, which are also published by Constable. She divides her time between Paris, Istanbul and a village in the Cotswolds which is very much like Agatha’s beloved Carsely.