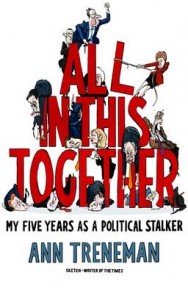 Home > Politics, Current Affairs and Ideas > All in it Together: My Five Years Stalking Dave and Nick

All in it Together: My Five Years Stalking Dave and Nick

This is the true, unvarnished story of Britain’s first coalition government since the Second World War. It began in May 2010 in the Downing Street garden, smelling of roses. Soon, though, it began to exude the aroma of something else entirely. Ann Treneman, the hilarious parliamentary sketch-writer for The Times, saw it all during those five long years, and here she records the foibles and fears, tempers and tantrums, bacon sandwiches and (many) pints of pure bitterness. Here are events that they would prefer to forget: the AV referendum; the tuition-fee vote; the omnishambles Budget; the dramatic Syria vote, and, of course, the panic-stricken event that was the Scottish referendum. She takes particular delight in the egos and extreme personalities of politics. David Cameron and his Flashman alter-ego. Nick Clegg’s struggle to stop looking sad. There is Ed ‘Two Kitchens’ Miliband, and the man they love to hate – Ed Balls. And always outside the tent, driving everyone mad, is Nigel Farage, pint and fag in hand, of UKIP fame. You really couldn’t make it up and she didn’t have to. George Osborne told us that we were all in it together. Well, they certainly are – in this book.

Ann Treneman is an award-winning journalist who has been the parliamentary sketch-writer for The Times for ten years.She is the author of two books of parliamentary sketches: Dave & Nick: The Year of The Honeymoon (9781849541640) andAnnus Horribilis: The Worst Year in British Politics (9781906142643).