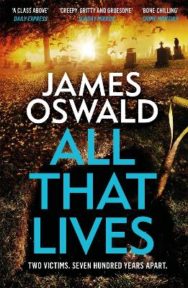 Home > Fiction from Scotland > All That Lives: the gripping new thriller from the Sunday Times bestselling author

All That Lives: the gripping new thriller from the Sunday Times bestselling author

Two victims. Nothing connects them, except that someone buried them in the exact same way.Seven hundred years apart.An archaeological dig at the old South Leith parish kirkyard has turned up a mysterious body dating from around seven hundred years ago. Some suspect that this gruesome discovery is a sacrifice, placed there for a specific purpose.Then a second body is unearthed. This victim went missing only thirty years ago – but the similarities between her death and the ancient woman’s suggest something even more disturbing.Drawn into the investigation, Inspector McLean finds himself torn between a worrying trend of violent drug-related deaths and uncovering what truly connects these bodies. When a third body is discovered, and too close for comfort, he begins to suspect dark purpose at play – and that whoever put them there is far from finished.Praise for James Oswald:’The new Ian Rankin’ Daily Record’Creepy, gritty and gruesome’ Sunday Mirror’Crime fiction’s next big thing’ Sunday Telegraph

Reviews of All That Lives: the gripping new thriller from the Sunday Times bestselling author

James Oswald is the author of the Sunday Times bestselling Inspector McLean series of detective mysteries, as well as the new DC Constance Fairchild series. James’s first two books, NATURAL CAUSES and THE BOOK OF SOULS, were both short-listed for the prestigious CWA Debut Dagger Award. ALL THAT LIVES is the twelfth book in the Inspector Mclean Series.James farms Highland cows and Romney sheep by day, writes disturbing fiction by night.