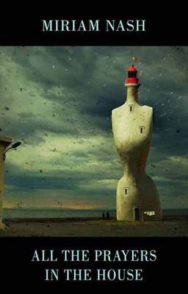 Home > Poetry, Drama, Criticism > Poetry > All the Prayers in the House

All the Prayers in the House

Miriam Nash spent her early years on the Isle of Erraid, West Scotland, where Robert Louis Stevenson’s family once worked as lighthouse engineers. Voices of the island echo through her first collection, All the Prayers in the House, which holds at its heart, the rupture and re-imagining of a family. Shifting and non-linear, the collection travels far from its coastal opening, moving south, crossing the Atlantic, visiting a women’s prison and a 17th century ladies dictionary. Here are poems of ritual and transgression, safety and danger, tussles with the meaning of companionship and marriage. Bold, honest, imaginative and playful, they take the form of postcards, fragments, letters, underwater phonecalls and formal verse – many kinds of prayer, perhaps, for many kinds of storm.

Reviews of All the Prayers in the House

'Miriam Nash's work is thematically satisfying, energetic and dynamic. These anarchic poems are the product of an original and febrile mind. A blast.' – Jackie Kay, Edwin Morgan Poetry Award 2016; 'Miriam Nash's poems provide pleasure through the variety and veracity of their subject matter, her insight and freshness of approach, and the warmth she breathes into them. Through subtle shifts of key and perspective they remain touchingly accessible, whether recapturing girlhood fears and vulnerabilities or creating semi-dream worlds, as when corresponding with RLS. Equally at ease with a broken line and traditional ballad form, her often quirky ways of seeing are enhanced by the lightsomeness of a songstress.' – Stewart Conn, Edwin Morgan Poetry Award 2016; 'An already mature voice exploring with great precision our painstaking routines.' – Daljit Nagra

Miriam Nash was born in 1985 in Inverness and grew up in Scotland, England and Wales. She was awarded a Fulbright Scholarship to study poetry at Sarah Lawrence College in New York, and graduated with an MFA in 2014. She has performed her work internationally, and brought poetry into schools, museums, mental health organisations and prisons in the UK, USA and Singapore. She was the first Writer in Residence at Greenway, Agatha Christie’s summer home, as part of Writing Places with the National Trust, Literature Works and The Poetry Archive. Her poetry has appeared in numerous magazines and her pamphlet, Small Change (flipped eye), was published in 2013. She received an Eric Gregory from the Society of Authors in 2015, and was runner-up for the Edwin Morgan Poetry Award in 2016. Her first book-length collection, All the Prayers in the House, is published by Bloodaxe in 2017.