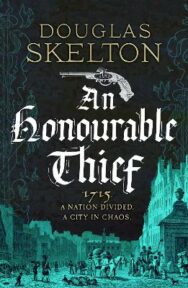 ‘Fast, furious and with a glint of gallows humour, this is high-octane historical fiction’ Daily Mail

‘Swashbuckling action against a vivid historical backdrop. I loved this book’ Ian Rankin

‘High adventure meets espionage thriller as Jonas Flynt battles the tide of history and the deadly secrets of his own past…’ D. V. Bishop, author of City of Vengeance

1715. Jonas Flynt, ex-soldier and reluctant member of the Company of Rogues, a shady intelligence group run by ruthless spymaster Nathaniel Charters, is ordered to recover a missing document. Its contents could prove devastating in the wrong hands. On her deathbed, the late Queen Anne may have promised the nation to her half-brother James, the Old Pretender, rather than the new king, George I. But the will has been lost. It may decide the fate of the nation. The crown must recover it at all costs. The trail takes Jonas from the dark and dangerous streets of London to an Edinburgh in chaos. He soon realises there are others on the hunt, and becomes embroiled in a long overdue family reunion, a jail break and a brutal street riot. When secrets finally come to light, about the crown and about his own past, Jonas will learn that some truths, once discovered, can never be untold…An atmospheric and utterly compelling blend of crime, history and thriller, to delight fans of S. J. Parris, Andrew Taylor and C. J. Sansom.

Douglas Skelton has published twelve non fiction books and ten crime thrillers. Thunder Bay, a dark and atmospheric tale of secrets, lies and murder on a Scottish island, was published to great acclaim in 2019. He has thrice been longlisted for the McIlvanney Prize, most recently in 2022. Douglas contributes to true crime shows on TV and radio and is a regular on the crime writing festival circuit.