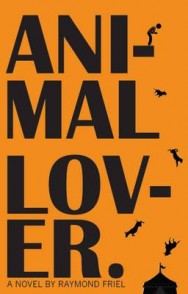 Danny is in trouble. A wannabe animal rights activist and modern day hero, none of this was supposed to happen. After his first attempt at animal liberation ends badly, things go rapidly downhill. In the supermarket where he works his behaviour is becoming more erratic and a number of people, including his boss (a big Jim Davidson fan), a Goth grocery girl (and also teenage poet) and a security guard (enough said) are all out to get him. The woman he loves, Shona, is becoming more extreme by the minute and when they hook up with some hunt saboteurs she’s more interested in digging up human graves and stealing the remains than saving foxes. Danny doesn’t waste his time at the hunt either – thanks to him the fox gets torn to pieces. It’s treble or nothing time, and next week the Circus is coming to town.

An entertaining romp that challenges your preconceptions of a world often steeped in mystery. — Jonathon Whitelaw The Sun 20131115

RAYMOND FRIEL is a Scottish screenwriter based in Glasgow. He has two feature film credits: The Calcium Kid starring Orlando Bloom and Botched with Stephen Dorff. Both of these films were released in cinemas in the UK and distributed worldwide. Friel has worked on a variety of other film and television projects with the UK Film Council, Scottish Screen, Creative Scotland, Shine Entertainment, Channel 4 and the BBC. His play, Moriarty Is Crying, won the Willy Russell Award for New Writing and was performed at the Edinburgh Festival and the Citizens Theatre in Glasgow. Friel also writes and directs a live comedy sketch show that has featured in the Glasgow Comedy Festival and played to sell out crowds. He lives with his wife and two children, Remy and Etienne. His Jack Russells, Stubby and Rigsby, feel the book could have done with a bit more rabbit chasing and a lot less talking.