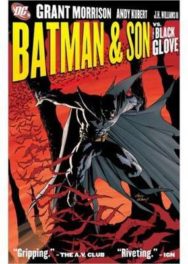 Batman receives the shock of his life when he discovers that he has a son, Damian! After violent conflict with Robin and Damian, Batman must teach his son what it means to carry the legacy of Gotham’s Dark Knight. Meanwhile, mysterious Batman impostors begin to appear on the streets of Gotham. One of these impostors begins to kill cops, working his way towards Commissioner Jim Gordon.

Grant Morrison’s credits include Arkham Asylum, JLA, Animal Man, Doom Patrol, The Invisibles and The Filth. Andy Kubert, son of comics master Joe Kubert, has long been one of comics’ greatest young talents, with work including both X-Men and Ultimate X-Men, Adam Strange, Captain America, 1602 and much more! James “Jim” H. Williams III, is a comic book artist and penciller. He is known for his work on titles such as Chase.