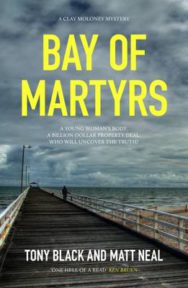 Clay Moloney, a downbeat and cynical reporter with an Australian newspaper, uncovers corruption when he looks into the death of a young woman whose body is washed up at the Bay of Martyrs. The death is an inconvenience for Moloney, who’s content filing obituaries and re-writing government press releases on the new $1.5 billion airport. A looming election, an eviction order from his landlord and a needy partner with a marriage timetable only add to his woes.As Moloney becomes obsessed with the murder investigation, Bec, his bluntly to-the-point Irish photographer, suggests he may be using the case as a diversion away from a painful past. Moloney’s suspicions about the crime point to local construction magnate, Lachlan Fullerton, and the region’s election candidate, Wayne Swanson, the federal investment minister. Will Clayachieve justice for the young student, or will those in power stop him before he uncovers the truth?

Tony Black was born in Australia and grew up in Scotland and Ireland. He is an award-winningjournalist, editor, and novelist. He is the author of thirteen books including Paying for It, Gutted,Long Time Dead, and most recently Summoning the Dead. He has been nominated for a CWADagger seven times and was runner up in the Guardian’s Not the Booker Prize for The LastTiger.Matt Neal is an Australian journalist, film reviewer, musician, songwriter. Born and raised insouth-west Victoria, he’s been a journalist with the Warrnambool Standard for 15 years. He’s aprize-winning songwriter as well as a frequent movie reviewer for Australiais ABC Radio.