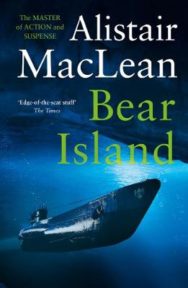 Reissue of the classic tale of adventure and death on a mysterious Arctic island, from the acclaimed master of action and suspense.A converted fishing trawler, Morning Rose carries a movie-making crew across the Barents Sea to isolated Bear Island, well above the Arctic Circle, for some on-location filming, but the script is a secret known only to the producer and screenwriter.En route, members of the movie crew and ship’s company begin to die under mysterious circumstances. The crew’s doctor, Marlowe, finds himself enmeshed in a violent, multi-layered plot in which very few of the persons aboard are whom they claim to be.Marlowe’s efforts to unravel the plot become even more complicated once the movie crew is deposited ashore on Bear Island, beyond the reach of the law or outside help. The murders continue ashore, and Marlowe, who is not what he seems to be either, discovers they may be related to some forgotten events of the Second World War.

Alistair MacLean, the son of a Scots minister, was brought up in the Scottish Highlands. In 1941 he joined the Royal Navy. After the war he read English at Glasgow University and became a schoolmaster. The two and a half years he spent aboard a wartime cruiser were to give him the background for HMS Ulysses, his remarkably successful first novel, published in 1955. He is now recognized as one of the outstanding popular writers of the 20th century, the author of 29 worldwide bestsellers, many of which have been filmed.