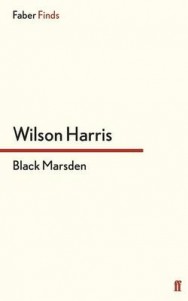 Wilson Harris’ tenth novel, first published in 1972, is set in Edinburgh but, like much of his subsequent work, bridges continents by its imaginative reach. “Doctor Black Marsden’, tramp, shaman, and conjurer, is an ambivalent Merlin-figure representing both the hero’s personal (and archetypal) shadow, and the creative, magus – like activity of the author himself.’ Michael Gilkes, Journal of “Commonwealth Literature”‘…my many visits to Scotland, and books I have read, have given me the sensation of a tone or inner vibrancy that may be due to the languages (English, Scottish, Gaelic) that are present in the subconscious imagination of sensitive Scots…[These] make for the cross-culturality (not mono-cultural) that came into play in Black Marsden.” (Wilson Harris, 2008).

Wilson Harris was born in 1921 in the former colony of British Guiana. He was a land surveyor before leaving for England in 1959 to become a full-time writer. His exploration of the dense forests, rivers and vast savannahs of the Guyanese hinterland features prominently in the settings of his fiction. Harris’s novels are complex, alluding to diverse mythologies from different cultures, and eschew conventional narration in favour of shifting interwoven voices. His first novel Palace of the Peacock (1960) became the first of The Guyana Quartet, which includes The Far Journey of Oudin (1961), The Whole Armour (1962) and The Secret Ladder (1963). He later wrote The Carnival Trilogy (Carnival (1985), The Infinite Rehearsal (1987) and The Four Banks of the River of Space (1990)). His most recent novels are Jonestown (1996), which tells of the mass-suicide of a thousand followers of cult leader Jim Jones; The Dark Jester (2001), his latest semi-autobiographical novel, The Mask of the Beggar (2003), and one of his most accessible novels in decades, The Ghost of Memory (2006). Wilson Harris also writes non-fiction and critical essays and has been awarded honorary doctorates by several universities, including the University of the West Indies (1984) and the University of Liege (2001). He has twice been winner of the Guyana Prize for Literature.