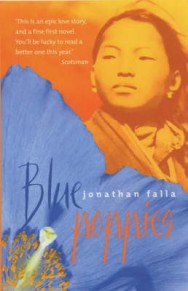 It is 1950. In a remote Tibetan village, on the border with China, Puton, a young woman, crippled and widowed in a terrifying attack, and now seen as an omen of bad luck by the villagers, meets a stranger – a young Scot, Jamie. He is in the village to set up a radio post. Both are lonely and isolated. Puton is scared of the locals and the Chinese; Jamie is homesick. As their attraction for each other grows, Communist China invades Tibet. The villagers must flee to safety, and led by Jamie, and his friend, Nima, a Buddhist monk and herbalist, the caravan tries to dodge the army, led by a vengeful Chinese commander. The villagers’ epic journey, exhilarating and appalling by turns, is an adventure both dangerous and harrowing, with an ending few would expect in this vital rush against time. There are echoes of Chaucer, well crafted snapshots of Tibetan life, and detailed cameos of exhausted villagers torn between their need to survive and the love for their country and one another. But the true romantic vision in the book is that of an inquisitive stranger in a foreign land.Written with a light and sensitive touch, Blue Poppies is a dramatic, fast-moving story that paints a vivid picture of Tibetan life in the late 1940s and early 1950. Although charged with emotion, it is a thoughtful and unsentimental portrayal of the country.

Jonathan Falla was born in Jamaica in 1954 and brought up in Twickenham. He recalls holidays in Wales and taking tea with Bertrand Russell. He won a scholarship to Cambridge from Bedales School and after training as a nurse he worked for aid agencies in Nepal, Sudan, Burma and Uganda. A writer for many years, he still works as a nurse, sings baritone professionally and has studied screenwriting at the University of Southern California.