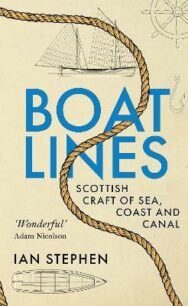 People are drawn to the harbours and boats of Scotland whether they have a seafaring background or not. Why do boats take on different shapes as you follow the complex shorelines of islands and mainland? And why do the sails they carry appear to be so many shapes and sizes? Then there are rowing craft or power-driven vessels which can also be considered ‘classics’, whether they were built for work or leisure.As he traces the iconic forms of a selection of the boats of Scotland, Ian Stephen outlines the purposes of craft, past and present, to help gain a true understanding of this vital part of our culture. Sea conditions likely to be met and coastal geography are other factors behind the designs of a wide variety of craft.Stories go with boats. The vessels are not seen as bare artefacts without their own soul but more like living things.

Reviews of Boatlines: Scottish Craft of Sea, Coast and Canal

'Wonderful… a rich compendium of the Scottish engagement with the sea' — Adam Nicolson, author of Life Between the Tides 'The small boats that made Scottish history have never seemed so charismatic and characterful as in Ian Stephen's gorgeous, vivid prose. A writer uniquely attuned to the water, and to the relationships each boat shares with the places it shaped, his stories restore past sea roads and river routes to life' — David Gange, author of The Frayed Atlantic Edge

Ian Stephen is a writer, artist and storyteller from the Isle of Lewis in the Outer Hebrides. After graduating from Aberdeen University he worked for 15 years in the coastguard service, based in Stornoway, where he still lives. Since 1995 he has worked full-time in the arts after winning the inaugural Robert Louis Stevenson award. His poetry and fiction have been published throughout Europe and North America, and his first non-fiction book, Waypoints, was published to critical acclaim by Bloomsbury in 2017.