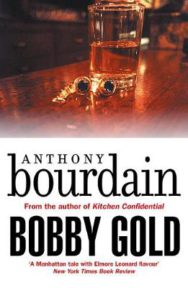 Ten slices from the life of Bobby Gold: by night, the security chief of a mobbed-up New York City nightclub, by day, a reluctant bonebreaker and enforcer for Eddie Fish – his old college roommate, and best friend.Emerging from the ‘gladiator school’ environment of an upstate prison with an imposing physique and a reputation for skilled brutality, Bobby’s a lonely, guilt-ridden child inside a hulking body. He views the grim work of coercion, assault and even murder as jobs to be done with a craftsman’s work ethic and with a minimum of force. However, the technician’s pride in a job done well is failing him, his friend and protector Eddie is getting flakier and flakier and worst of all, he’s falling in love with Nicole, a reckless and self-destructive female line-cook who”s been around the block a few times.Following on from his two superb novels, Bone in the Throat and Gone Bamboo, Anthony Bourdain has produced another stunning book of crime fiction.

Anthony Bourdain was a world-renowned chef, travelling the world for his Emmy Award-winning series Anthony Bourdain: Parts Unknown. He was the bestselling author of Kitchen Confidential. His fiction titles include Bone in the Throat and Bobby Gold. He died on 8 June 2018.