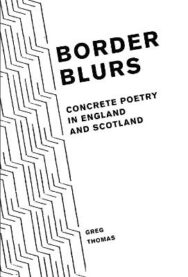 This book offers the first in-depth account of the relationship between English and Scottish poets and the international concrete poetry movement of the 1950s to the 1970s. Concrete poetry was a literary and artistic style which reactivated early twentieth-century modernist impulses towards the merging of artistic media, while simultaneously speaking to a gamut of contemporary contexts, from post-1945 reconstruction to cybernetics, mass media and the sixties counter-culture. The terms of its development in England and Scotland suggest new ways of mapping ongoing complexities in the relationship between the two national cultures, and of tracing broader sociological and cultural trends in Britain during the 1960s and 1970s. Focusing especially on the work of Ian Hamilton Finlay, Edwin Morgan, Dom Sylvester Houedard and Bob Cobbing, Border Blurs is based on new and extensive archival and primary research, and will fill a vital gap in contemporary understandings of an important but much misunderstood genre: concrete poetry. It will also serve as a vital document for scholars and students of twentieth-century British literature, modern intermedia art and modernism, especially those interested in understanding modernism’s wide geographical spread and late twentieth-century legacies.

Reviews of Border Blurs: Concrete Poetry in England and Scotland

'This is an excellent, well-researched and up-to-date account of the development of concrete poetry in England and Scotland from the 1950s onwards. It will make an outstanding contribution to knowledge in the related fields of concrete poetry, late modernism, the history of the 1960s counter-culture and the British Poetry Revival.'Dr Steve Willey, Birkbeck, University of London Reviews'GregThomas here gives us the first full treatment of English and Scottish concretepoetry. His survey is detailed andcomprehensive, and he is especially acute in his treatment of both the interactionof two distinct literary cultures – nationalism and internationalism – and the reciprocityof literature and other media. He thusargues that "classical concrete" was followed by another concrete "moreconcerned with complicating or undermining linguistic sense, and with instatingin language's place various forms of multi-media communication and expression …". A genuinely inventive and valuablebook for students and scholars of modernism, intermedia art, and Britishliterature.'Dr Nancy Perloff, Curator, Modern & Contemporary Collections, Getty Research Institute

Greg Thomas is an independent scholar and recent British Academy Postdoctoral Fellow based in London.