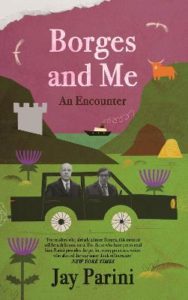 Home > Travel > Borges and Me: An Encounter

Borges and Me: An Encounter

In this evocative work of what the author in his Afterword calls ‘autofiction’ or ‘a kind of novelised memoir’, Jay Parini takes us back fifty years, when he fled the United States for Scotland. He was in frantic flight from the Vietnam War and desperately in search of his adult life. There, through unlikely circumstances, he met famed Argentinian author Jorge Luis Borges.Borges was in his seventies, blind and frail. Parini was asked to look after him while his translator was unexpectedly called away. When Borges heard that Parini owned a 1957 Morris Minor, he declared a long-held wish to visit the Scottish Highlands, where he hoped to meet a man in Inverness who was interested in Anglo-Saxon riddles. As they travelled, the charmingly garrulous Borges took Parini on a grand tour of western literature and ideas while promising to teach him about love and poetry. As Borges’s world of labyrinths, mirrors and doubles shimmered into being, their escapades took a surreal turn.Borges and Me is a classic road novel, based on true events. It’s also a magical tour of an era – like our own – in which uncertainties abound, and when – as ever – it’s the young and the old who hear voices and dream dreams.

Reviews of Borges and Me: An Encounter

This is a jewel of a book. Very funny, clever, moving, luminous with love of literature and landscape. Parini's portrait of both Borges and Scotland is exquisite, deeply affectionate, sometimes comically irritable . . . The young Parini's painful writing ambitions are beautifully wrought . . . It's hard to conceive of a how an old and frail blind man could have had such psychological force, such unworldly innocence, such redeeming sway over others, but Jay Parini persuades us fabulously in a high-style Borgesian marriage of fiction and history — IAN McEWAN For readers who already admire Borges, this memoir will be a delicious treat. For those who have yet to read him, Parini provides the perfect entry point to a writer who altered the way many think of literature * * New York Times * * Ironic, funny, adorable . . . What a wonderful book! It gave me so much pleasure to read it — ERICA JONG Praise for Jay Parini: Inspired . . . a piercing, magnificent novel — AMOS OZ A poignant and eloquent vision of the great critic's personality and fate — HAROLD BLOOM An exciting adventure story . . . wholly emblematic of our dark age — GORE VIDAL The friends who recall Benjamin come across as vivid individuals, but it is Benjamin himself who dominates the book, and he is wonderfully, infuriatingly alive, an intellectual hopelessly out of touch with his ailing body, curiously and tragically blind to the Europe disintegrating around him * * The Sunday Times * * Painstakingly researched and dramatically recounted . . . has something important to say about the role of the intellectual in modern Western Society * * New York Times Book Review * * Not only carefully researched but also, more importantly, thoroughly imagined * * Times Literary Supplement * * The distinguished poet, novelist and biographer rescues Benjamin from obscurity, celebrates his intellectual achievements, ponders his passions and eccentricities, and mourns his passing. As re-imagined by Parini, Benjamin's life story becomes a vivid metaphor for the apocalypse that ravaged the civilized world in the mid-20th century and cost the lives of countless millions of men, women and children, Benjamin among them * * LA Times * *

Jay Parini is Axinn Professor of English at Middlebury College, Vermont. In addition to New and Collected Poems: 1975-2015, he has published eight novels including The Last Station and Benjamin’s Crossing. He has written biographies of John Steinbeck, Robert Frost, William Faulkner and Gore Vidal. He edited The Oxford Encyclopeadia of American Literature and writes regularly for the Guardian and other publications.jayparini.com